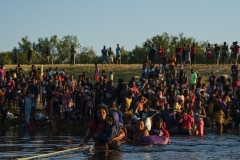 Haitian illegally cross the US-Mexico border on the Rio Grande on September 20, 2021. (Photo by PAUL RATJE/AFP via Getty Images)

(CNSNews.com) - Eleven Haitian asylum seekers are suing the Biden administration for allegedly abusive and discriminatory treatment after they crossed the border illegally.

The class-action lawsuit, filed on December 20 in the U.S. District Court for the District of Columbia, focuses on the widely viewed video of horse-mounted Border Patrol officers trying to prevent Haitians from entering further into Texas as well as the televised drone footage of the crowded Haitian encampment under a bridge in Del Rio.

The lawsuit also challenges the expulsion of Haitians under Title 42, the public health authority that denied "thousands of Haitians an opportunity to access the U.S. asylum process."

Texas Attorney General Ken Paxton told Fox News's Maria Bartiromo on Wednesday, "It seems pretty ridiculous that a lawsuit could be filed over illegal immigrants being treated supposedly in a way that they're not satisfied with. It just seems ludicrous.

"But, look, the entire border situation is ludicrous, and yet here we are, every day, dealing with a crisis that just goes on and on because the Biden administration doesn't face reality a or doesn't care about reality."

Paxton said the Biden administration has been "incentivizing" illegal immigration "since day one. It's incredibly frustrating, with the ranchers having to deal with property damage, fentanyl deaths are way up in this country as a result of this, and, of course, COVID is being spread at a massive rate because we don't vaccinate these people and we don't test them."

President Biden has been urging Americans to get COVID shots since he took office, and he did so again yesterday, amid the omicron surge, which is expected to further explode after the holidays:

"Well, if he wants to save thousands of American lives, why don't we start at the border where it's pretty easy, where we keep people from coming in that have COVID," Paxton said. "At the very least, vaccinate them and test them."

The lawsuit filed on behalf of Haitian asylum-seekers by U.S. immigration advocates begins with the story of one plaintiff, named Mirard Joseph, as follows:

1. On a hot day in mid-September, Mirard Joseph crossed the Rio Grande with his wife Madeleine and their one-year-old daughter. As they stepped onto the riverbank in Del Rio, Texas, Mirard and Madeleine were greeted by countless others who, like them, had fled danger and instability in Haiti and traveled thousands of miles to the United States to save their own and their families’ lives.

2. For days, Mirard and Madeleine waited patiently for an opportunity to seek asylum, a process they are entitled to access under U.S. law. They and at least 15,000 Haitian asylum seekers were kept in a makeshift encampment set up by U.S. Customs and Border Protection near the Del Rio International Bridge (the “CBP Encampment”). During the day, Mirard sweltered in triple-digit temperatures. At night, the family kept close as they slept on the ground, hopeful that they could soon request protection and begin new lives in the safety of the United States.

3. With each passing day, Mirard’s situation became more dire. U.S. officials in the encampment distributed only bottled water and bread to his family, and not enough to sustain anyone. He watched as Madeleine and their daughter suffered from hunger and dehydration. On September 18, 2021, Mirard crossed to Mexico to buy the food and water that his family desperately needed, but which U.S. officers had repeatedly denied. While in Mexico, Mirard made a note to return the next day for a treat for his daughter’s second birthday.

4. What Mirard met as he returned to Del Rio was captured in heartrending photos and video that stirred the national conscience and placed a spotlight on the treatment of Haitians in the CBP Encampment. After Mirard stepped out of the river, holding two bags of food for Madeleine and his daughter, he encountered a mounted officer. As other officers looked on --some on foot, others on horseback or in official vehicles -- the mounted officer shouted at Mirard, lashed at him with split reins, grabbed his neck, and held his collar. For several minutes, the officer

attempted to drag Mirard back to the river, destroying Mirard’s shirt and causing his shoes to fall off in the process. The officer released Mirard only when the horse was about to trample him. Two days later, Mirard and his family were taken to a detention facility. From there, Mirard and Madeleine were shackled, placed on a plane with their young daughter, and expelled to Haiti.

5. Mirard now reflects that when he was grabbed and dragged by the horse-mounted officer, it “was the most humiliating experience of my life. The second most humiliating moment was when they handcuffed and chained me to go back to Haiti.”

6. What happened to Mirard and many others was neither bad luck nor an isolated experience. It was the expected result of two policies [Title 42 and a "Haitian Deterrence Policy”] applied by U.S. officials in Del Rio.

The lawsuit also describes the grievances of each of the remaining ten plaintiffs.

The document also states that "[a]nti-Black racism and white supremacy motivated the earliest U.S. immigration policies and have continued to shape immigration laws through the present. Haitians have been one of the most common targets of the United States’ racist, exclusionary policies."

The lawsuit seeks to have the Title 42 Process  and the Haitian Deterrence Policy declared unlawful; an order "allowing each of the Individual Plaintiffs and class members to return to the United States and requiring Defendants to facilitate return, with appropriate precautionary health measures, so that Individual Plaintiffs may pursue their asylum claims in the United States"; an order "awarding Plaintiffs their costs of suit and reasonable attorneys’ fees and expenses pursuant to any applicable statute or regulation"; and an order "granting such further relief as the Court deems just, equitable, and proper."