Hawley: 'Mega Corporations Have Way Too Much Power in American Society' 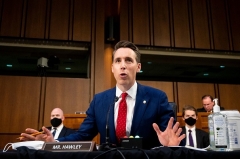 Hawley was talking about corporations such as those bowing to the social justice crowd in Georgia, pretending to be "woke" by protesting Georgia's new voting integrity law, but actually causing harm to the same communities they pretend to care about.

The response should be to break the monopolies, Hawley told host Ben Domenech:

We see monopolies across a lot of industries in some of the farmer areas, banks. We need to break up the monopolies pure and simple. We've done that before in American history -- that has been a tried and true remedy for mega corporations that want to exert too much power.

They’ve been shipping jobs overseas, they've been hollowing out the urban core, they've been taking away good paying jobs for Americans of all races and backgrounds. And they want to be left to continue to do that. They want us to look the other way while they continue to pursue those policies that have devastated whole communities, including in the urban core and pretend that they are somehow socially just. It's a shell game. And it's time we called them on it.

Hawley said it's "absolutely vital" for the Republican Party to end its financial dependence on corporate America, "especially the multinational globalist" companies.

Our voters have been telling us for years that they don't like our jobs being shipped overseas. They don't like the way that these corporations kowtow to China on one hand and then turn around and lecture Americans about social justice at home when they are some of the worst offenders.

I mean, look at who is actually dependent on global slavery. It's a lot of these corporations who depends on slave labor or exploited labor. It's the same corporations and yet here they want to tell Americans what to do. So, we need to -- it's time for Republicans to get tough and to say that we are not taking orders from these corporations.

We're not going to base our policy around them. And it's time we listen to our voters. And we've got to get tough on the corporations themselves. And I say again for those that are monopolies, they should be broken up.

Hawley said trust-busting used to be the "signature policy" of the Republican Party, and "it needs to be again."

As conservatives, he said, it's "all about free, fair competition, robust competition."

"Having these big multinational corporations try to lecture the American people and try to dictate the political process, including basically blackmailing legislatures like Georgia and others, that's wrong, that's dangerous. It is a danger to self-government. And we can't allow it," Hawley said.

Earlier on Tuesday, at a hearing of the Senate Judiciary Committee, Hawley called out the "powerful corporations" that have told so many "lies" about Georgia's election law.