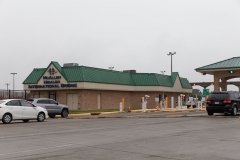 (CNSNews.com) - The newly elected mayor of McAllen, Texas, a city near the Mexico border, is a Republican who ran on a platform of fiscal responsibility and curbing taxes.

Javier Villalobos, a former city commissioner, defeated Democrat Veronica Vela Whitacre with 51.1 percent of the vote in Saturday's runoff election. McAllen is in Hidalgo County, which Democrat Joe Biden won by 17 points in the 2020 election. The county is -- or has been -- solidly Democrat.

"You know, this past election -- you know, having a good dose of competition is important, and people are realizing, generally, the Hispanic community is very conservative. But unfortunately, for whatever reason, historically they voted Democrat. But things are changing little by little, they're changing in different areas. It's finally hitting the south.

"I think it's very important, we got to keep on having a good dose of competition, competition makes things better. So...a few months later, everybody knows I was a former Hidalgo County Republican chairman, the people chose to elect me -- I think something that's very important. Things are changing, and we're very happy."

Villalobos also told Fox News that the illegal immigration crisis is something the federal government needs to deal with, and he said he would welcome a visit by Vice President Kamala Harris, who is now in Guatemala to discuss the root causes of the mass exodus from Central America.

"Look, we get a lot of visitors...and any time you have a federal official visiting, that's important. But what's more important -- look let's deal with the issue. I think we know what the root cause is -- let's take care of it.

“Unfortunately, we have to take care of it in Washington...and yes, we always welcome any federal official, any state official to come visit us here at the border to see some of the issues we have."

Villalobos said McAllen is not as impacted by illegal immigration as other communities are because the people crossing the border don't stay:

“We assist them, and they go up north. We don't have some of the issues other immigrants in the north might have. It's a pass-through. They come through here and they're gone.

“But it's something that-- look, it affects every single taxpayer in our country, and we got to address it -- the President, the Congress, the Senate, they have to address it."

Villalobos said one of the biggest concerns in McAllen is the closure of the international bridges to all but essential traffic because of COVID-19.

"Those are our bridges, they bring us revenues, and they've been shut down," the mayor-elect said. "Yet we have the other individuals that shouldn't really be coming here, or at least they're not coming in properly, and they're being welcomed. There's an issue we have, and we have to -- no, they have to take care of it."