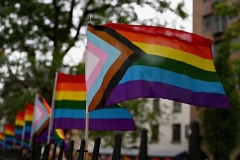 Rainbow flags fly outside the Stonewall Monument in New York City on June 7, 2022. (Photo by ANGELA WEISS/AFP via Getty Images)

(CNSNews.com) - The Indiana Supreme Court has been asked to decide whether and under what circumstances courts may order changes to a birth certificate to reflect a person’s gender identity rather than biological sex.

Indiana Attorney General Todd Rokita is defending the practice of listing biological sex on birth certificates rather than changing them years after the fact to reflect individuals’ self-perceived gender identities.

“The purpose of a birth certificate is obviously to establish a record of biological birth and certain relevant factual details of that occasion,” Attorney General Rokita said. “To change the designated sex on a birth certificate at a later date is in effect falsifying that document.”

While the Indiana General Assembly has the authority to pass a law permitting such alterations, the courts do not, Rokita noted in a brief submitted to the state's highest court. He wants the State Supreme Court to hold that the judiciary has "no statutory or inherent equitable power to order a change to the sex recorded on a birth certificate to reflect a different gender identity."

According to court documents, the Indiana Department of Health must issue birth certificates recording the biological sex of people born in Indiana. Recently, some courts have ordered that birth certificates instead record gender identity, even for very young children. The Court of Appeals is starkly divided over whether courts may issue such orders, and if so, what standards they should use.

The immediate case involves a child identified as O.J.G.S. who was born male, but has been treated as a girl by her family, peers, and doctors since around age two. The child's birth certificate and school and medical records list the child's sex as male. The child's mother filed a petition in Allen County Circuit Court requesting changes to O.J.G.S.’s name and gender marker on O.J.G.S.’s birth certificate.

"Even apart from the statutory text, whether any wrong has occurred is highly debatable. Reasonable people may disagree over whether a birth certificate should record a person’s biological sex or gender identity.

“Recording a person’s biological sex may be useful for demographic statistical purposes or for ensuring medical records made from a birth certificate reflect a person’s biology (which may be important for treatment decisions).”

“We all should care about and sympathize with our fellow Hoosiers’ specific life experiences,” Attorney General Rokita said. “By insisting on public policies that serve the greater good, we ultimately reinforce that principle rather than diminish it.”