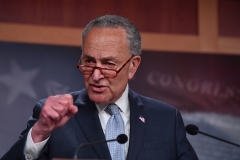 (CNSNews.com) - The Women's Health Protection Act, already passed by the House, is expected to come up for a procedural vote in the Senate on Wednesday.

Senate Majority Leader Chuck Schumer (D-N.Y.) said on Monday the bill barring government restrictions on abortion poses "a simple but urgent question -- do women in this country have a basic right to make their own choices when it comes to seeking an abortion? Yes or no?"

It is widely believed that the Senate lacks the 60 votes needed to advance the bill to a final vote. But Schumer insisted that the cloture vote "is not an abstract exercise."

"This is as real and as high-stakes as it gets, and Senate Republicans will no longer be able to hide from the horror they've unleashed upon women in America," Schumer railed. "Every American is going to see where every senator stands on protecting one of the most important rights a woman has regarding her own body."

Section 2 of the House-passed bill (H.R.3755), the "Findings and Purpose" section, reads like a leftist manifesto:

Here's a sample, by no means complete, of what "Congress finds" to be true:

-- "Abortion services are essential to health care and access to those services is central to people’s ability to participate equally in the economic and social life of the United States. Abortion access allows people who are pregnant to make their own decisions about their pregnancies, their families, and their lives."

-- "Reproductive justice requires every individual to have the right to make their own decisions about having children regardless of their circumstances and without interference and discrimination. Reproductive Justice is a human right that can and will be achieved when all people, regardless of actual or perceived race, color, national origin, immigration status, sex (including gender identity, sex stereotyping, or sexual orientation), age, or disability status have the economic, social, and political power and resources to define and make decisions about their bodies, health, sexuality, families, and communities in all areas of their lives, with dignity and self-determination."

-- "Reproductive justice seeks to address restrictions on reproductive health, including abortion, that perpetuate systems of oppression, lack of bodily autonomy, white supremacy, and anti-Black racism. This violent legacy has manifested in policies including enslavement, rape, and experimentation on Black women; forced sterilizations; medical experimentation on low-income women’s reproductive systems; and the forcible removal of Indigenous children. Access to equitable reproductive health care, including abortion services, has always been deficient in the United States for Black, Indigenous, and other People of Color (BIPOC) and their families."

-- "The legacy of restrictions on reproductive health, rights, and justice is not a dated vestige of a dark history. Presently, the harms of abortion-specific restrictions fall especially heavily on people with low incomes, BIPOC, immigrants, young people, people with disabilities, and those living in rural and other medically underserved areas. Abortion-specific restrictions are even more compounded by the ongoing criminalization of people who are pregnant, including those who are incarcerated, living with HIV, or with substance-use disorders. These communities already experience health disparities due to social, political, and environmental inequities, and restrictions on abortion services exacerbate these harms…”

-- "Abortion-specific restrictions are a tool of gender oppression, as they target health care services that are used primarily by women. These paternalistic restrictions rely on and reinforce harmful stereotypes about gender roles, women’s decision-making, and women’s need for protection instead of support, undermining their ability to control their own lives and well-being. These restrictions harm the basic autonomy, dignity, and equality of women, and their ability to participate in the social and economic life of the Nation."

-- "Abortion is essential health care and one of the safest medical procedures in the United States..."

-- "Many abortion-specific restrictions do not confer any health or safety benefits on the patient. Instead, these restrictions have the purpose and effect of unduly burdening people’s personal and private medical decisions to end their pregnancies by making access to abortion services more difficult, invasive, and costly, often forcing people to travel significant distances and make multiple unnecessary visits to the provider, and in some cases, foreclosing the option altogether..."

-- "International human rights law recognizes that access to abortion is intrinsically linked to the rights to life, health, equality and non-discrimination, privacy, and freedom from ill-treatment...UN independent human rights experts have expressed particular concern about barriers to abortion services in the United States..."

-- "Health care providers engage in a form of economic and commercial activity when they provide abortion services, and there is an interstate market for abortion services...Abortion restrictions substantially affect interstate commerce in numerous ways..."

The bill would permit health care providers "to provide abortion services without limitations or requirements that single out" abortion more than other "medically comparable procedures." And it would "promote access to abortion services."

"It doesn't codify Roe," Graham told Fox News on Monday: "What it would do would allow abortion to be had right up until the moment of birth. Roe v. Wade says the state can regulate abortion after viability of the fetus is about 23-24 weeks.

"This goes well beyond, so the answer to Roe v. Wade being potentially repealed is to nationalize a law that allows abortion right up to the moment of birth. That is pretty extreme," Graham said.

Unlike the House-passed bill, the Senate bill omits some of the leftist jargon, but it is just as far-reaching.

The Senate bill says, "A health care provider has a statutory right under this Act to provide abortion services...and that provider's patient has a corresponding right to receive such services, without any of the following limitations or requirements:

The bill lists 11 specific limitations or requirements, including some of those allowed under Roe v. Wade.

One of the limitations banned by the bill would allow abortion up to birth:

-- "A prohibition on abortion after fetal viability when, in the good-faith medical judgment of the treating health care provider, continuation of the pregnancy would pose a risk to  the pregnant patient's life or health."