Kamala Harris to 'Justice' Protesters: 'You Are the Heroes of Our Time' 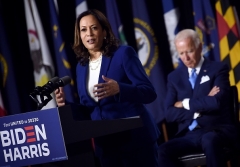 (CNSNews.com) - Sen. Kamala Harris (D-Calif.), formally introduced as Joe Biden's running mate on Wednesday, praised "everyone keeping up the fight" for "justice" as "the heroes of our time."

All across this country, a whole new generation of children is growing up hearing the cries for justice and the chants of hope on which I was raised, some strapped into strollers of their own. And trust me, it's a song you'll never forget.

Earlier in her speech, Harris noted that her parents met as students during civil rights protests in the streets of Oakland, "marching and shouting for this thing called justice, in a struggle that continues today.

"And I was part of it; my parents would bring me to protests, strapped tightly in my stroller. And my mother, Shamala, raised my sister Maya and me to believe that it was up to us, and every generation of Americans, to keep on marching."

In describing the challenges the country faces, Harris said, “We are experiencing a moral reckoning with racism and systemic injustice that has brought a new coalition of conscience to the streets of our country, demanding change.”

This election is about more than politics. It's about who we are as a country. And I'll admit, over the past four years, there have been moments when I have truly worried about our future.

But whenever I think that there is a reason for doubt, whenever I have had my own doubts, I think of you, the American people -- the doctors and nurses and front-line workers who are risking your lives to save others; the truck drivers and the workers in grocery stores, and factories and farms, working there, putting your own safety on the line to help us get through this pandemic; the women and students taking to the streets in unprecedented numbers; the dreamers and immigrants who know that families belong together; the LGBTQ Americans who know that love is love; people of every age and color and creed who are finally declaring, in one voice, that, yes, black lives matter.

At the conclusion of her speech, Harris said winning is not enough for Democrats on November 3rd: "We need a mandate that proves that the past few years do not represent who we are or who we aspire to be."