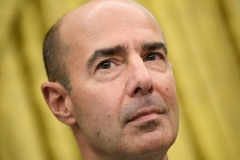 (CNSNews.com) - As more states open up for business again, they should be sure that people collecting the $600-a-week unemployment benefit provided by the CARES Act don't sit home because they're making more now than they did on the job.

"It was important to us to provide an extra measure of support to American workers who are making this exceptional sacrifice," Labor Secretary Eugene Scalia told Stuart Varney, host of Fox's "Varney & Co."

One, if you are on unemployment and given a chance to go back to your job, you should not be remaining on unemployment without a very good reason for not going back. Second, we are expecting the states to be mindful of that.

Obviously, we want people on the job when that opportunity arises.

Scalia said that on Thursday, one day before the Labor Department's Bureau of Labor Statistics releases what is sure to be a devastating unemployment report.

Scalia refused to predict how bad Friday's report might be. But he did try to put it in perspective:

"What I will say is, first, I think tomorrow's job report will be maybe the most contingent, fluid job report we've ever seen because we know were in transition, even as there are still job losses.

"There are now job gains going on in the 26 some states that are starting to reopen. And I think that the e discipline that business people and workers exercise now, including safety in the workplace, will be an important determinant of how quickly we are able to put jobs back as the year progresses."

Varney noted that not all jobs will come back, and Scalia agreed: "I think there are going to be changes," he said:

"Different segments of the economy undoubtedly are going to be affected differently. We'll put our jobs report for April out tomorrow, as you said. I'm going to look at health care. There are going to be a lot of job losses in health care, a surprising number for a lot of people. But we know that those jobs are all coming back, and more. So that's one industry.

"Travel, you're right, that will be slower, but I do believe this -- that we came into this from a very strong foundation, as a result of the president's policies of tax cuts and reducing unnecessary government regulation.

"We have to keep those things in mind as we move forward because I think those policies will bring us back more quickly."