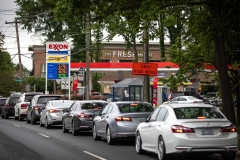 Motorists line up at an Exxon station in Charlotte, North Carolina on May 12, 2021. (Photo by LOGAN CYRUS/AFP via Getty Images)

(CNSNews.com) - "You guys are bad. I'm not supposed to be answering all these questions. I'm supposed to leave, but I can't resist your questions," President Joe Biden told the White House press corps on Wednesday.

Biden had just finished remarks about vaccine approval for children ages 12 and up. "My hope is that parents will take advantage of the vaccine and get their kids vaccinated," Biden said.

As he prepared to leave the room, reporters shouted questions about other pressing matters -- the panic purchases of gasoline because of a major pipeline disruption; war in the Middle East; and the outlook for Biden's multi-trillion infrastructure plan.

(Last week, Biden told reporters, "I'm really going to be in trouble" for answering questions. Later, during a podcast, White House Press Secretary Jen Psaki said Biden is urged NOT to take questions: "That is not something we recommend," Psaki said. "In fact a lot of times we say, don't take questions." But, she noted, "He's going to do what he wants to do, because he's the president of the United States.")

On Wednesday, Biden took the first question shouted at him, which was: "Mr. President, what do you say to Americans who are worried about the supply of gas and rising prices right now?"

The question came on a day when American commuters on the East Coast waited for hours to fill their tanks at the few gas stations that still had fuel.

"We have been in very, very close contact with Colonial Pipeline, which is the one area you're talking about -- where the one of the reasons that gasoline prices are going up. And I think you're going to hear some good news in the next 24 hours. And I think we'll be getting that under control," Biden responded:

Secondly, I have, in the meantime, made it easier for us to--I've lifted some of the restrictions on the transportation of fuel, as well as access to the United States military providing fuel and with vehicles to get it there where--places where it's badly needed.

And I'd also point out that I think what this shows is that I think we have to make a greater investment in education as it relates to being able to train and graduate more people proficient in cybersecurity. And I have been saying for a long, long time now, I know I probably--you could probably say it for me, but I think that one of the most important things we have to do to reclaim our place as the leading innovator of the world is to have a better educated workforce.

And that goes back to the days a long time ago now--or five years ago when I was vice president and I surveyed all Fortune 500 companies, said what do you most need? And remember what they said? Better educated workforce. But they're not spending money to educate the workforce. And--but it's important that we do this.

And the cybersecurity piece is what I think you're going to see where we need a significantly larger number of experts in the area of cybersecurity working for private companies, as well as private companies being willing to share data as to what--how they're protecting themselves. I think that's part of the long-term answer, not just in terms of energy, but across the board. I know that's not a direct response to your question, but it does impact on it, I think, down the road. Thank you.

A reporter shouted another question, which Biden also answered: "Are you concerned about the violence in the Middle East?"

"My national security staff and defense staff has been in constant contact with their counterparts in the Middle East, not just with the Israelis, but also with everyone from the Egyptians and the Saudis to the Emiratis, et cetera. And I had a conversation with Bibi Netanyahu not too long ago. I'll be putting out a statement very shortly on that," Biden said.

"My expectation and hope is that this will be closing down sooner than later. But Israel has a right to defend itself when you have thousands of rockets flying into your territory. But I had a conversation for a while with--with the prime minister of Israel, and I think that--my hope is that we'll see a--this coming to the conclusion sooner than later. Thank you."

When a reporter shouted a third question about Biden's meeting with Republicans on infrastructure, Biden made the "you guys are bad" remark. Then he said he came away from Wednesday's meeting "encouraged that there is room to have a compromise on a bipartisan bill that's solid and significant, and a means by which to pay for without dropping all of the--all of the burden on--on middle-class and working-class people."

This led the president back to the gasoline situation:

"Look, what's the one thing people are concerned about with the gas--gasoline? Prices going up. Exactly right. And it matters if you make $40,000 a year. It matters if you're a two-family person that--making 80, $90,000--two-family--two wage-earners. It matters.

"And what I don't want to do--and this will be another discussion we didn't get into today, is how to pay for it. And if everything is paid for by the user fee, well, then, you know, the burden falls on working-class folks who are--you are having trouble. They're--we're--we're getting them out of the--they're coming around, but it has--this has to be a burden shared across the spectrum. Anyway, thank you, guys," Biden said, walking away.