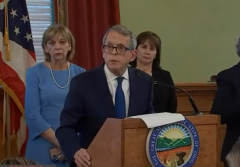 (CNSNews.com) - Ohio has joined six other states -- Maryland, Louisiana, Massachusetts, Michigan and Virginia -- in an agreement to purchase many more rapid COVID-19 tests that deliver results in minutes, not days.

On Wednesday night, CNN's Chris Cuomo asked Ohio Republican Governor Mike DeWine why the federal government isn't doing this for the states, instead of letting the states fend for themselves.

But we're in this now. We're right in it. We're trying to play catch-up ball. As I said, we doubled our testing in the last six weeks in Ohio, but we've got to double it again and then double it again.

Right now, it takes six or seven days for some COVID tests results to come back from the lab, and "that's not satisfactory at all," DeWine said.

In an announcing the multi-state purchasing agreement earlier this week, DeWine said, "Rapid point-of-care tests are faster, simpler, and less expensive. Expanding the use of this testing will serve as an important screening tool and a critical addition to our plan to limit the spread of COVID-19. More rapid point-of-care testing will help Ohio detect outbreaks sooner with faster turnaround time, expand testing in congregate settings, and make testing more accessible for the most high-risk and hard-hit communities."

But if we had more testing -- we could do a lot of things with more testing. You know, we could save a lot of lives. Also could allow people to do more things in their lives that they want to do.

DeWine said his state already has doubled its testing to an average 22,000 a day – nowhere near enough, he said.

On Wednesday morning, President Donald Trump was asked about the shortage of rapid testing in an interview on “Fox & Friends”:

A box containing a 5-minute test for COVID-19 from Abbott Laboratories. (Photo by MANDEL NGAN/AFP via Getty Images)

"Where is this test? host Brian Kilmeade asked the president:

"We're at 50 percent on the test -- the Abbott test or its equivalent where it's a five-minute test and goes up to 15 minutes,” Trump responded. “It's a great test. By the way, that test didn't even exist until we came up with that test."

Kilmeade said he doesn't know anyone who got the rapid test. They had to wait days for results to come back from a lab.

"Brian, we have right now 50 percent -- 50 percent of the country is short-term testing," Trump insisted. "We're going to (get) more, but you have to remember, we did 61 million tests." That was all Trump said about rapid testing.

According to the Centers for Disease Control and Prevention, "State and Local Health Departments retain the primary responsibility for health under the US Constitution."