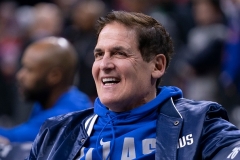 (CNSNews.com) - Mark Cuban, the Dallas Mavericks' owner and a cohost of ABC's "Shark Tank" told Fox News on Monday night he is not closing the door on a presidential run in 2020, because "a lot can happen between now and November."

What did the president say about taking hydroxychloroquine? What could possibly -- you know, why not?

You know, that's effectively it. I mean, there's so many different things that could go wrong. You know, here's our president taking a drug that could increase his risk. Crazier things have happened.

But we’re just in strange times. If there's a resurgence of the virus and just the things that the president put in place just go horribly wrong, or that Joe Biden proposes go horribly wrong -- maybe somebody -- people are going to look to somebody else and a different type of solution.

Host Martha MacCallum asked Cuban, "So you think the president is just taking a risk that he should not be taking in taking that drug?

"You know, all I can tell you is what I've read in the studies," Cuban responded. "And, you know, supposedly taking hydroxychloroquine can extend your QT and create other types of heart ailments. But again, I'm not the doctor, I'm not the scientist, I just know what I've read.

"And what was his line, Martha? I forget what his exact words were."

Trump announced on Monday that he has been taking "one pill a day" for about a week-and-a-half as a preventive measure against COVID-19, because he believes the good things he's heard about it.

Trump said he has "zero" symptoms, and "at some point, I'll stop. What I'd like to do is, I'd like to have the cure and/or the vaccine, and that will happen, I think, very soon."

But, Cuban added, "It's his choice, obviously.This is America, he gets to make his own choice with his doctor. And so, 'what have you got to lose' is not the way to run a country. And so you just never know what might happen."