Mayorkas on Border Security: 'I Think That We Are Doing a Good Job.' 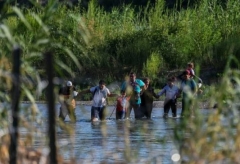 The U.S.-Mexico border along the Rio Grande River in Texas, June 30, 2022. (Photo by Chandan Khanna/AFP via Getty Images)

(CNSNews.com) - The Biden administration's "do not come" message is not deterring hundreds of thousands of foreigners from illegally entering the United States, as they come here in record-breaking numbers.

But on Sunday, Homeland Security Secretary Alejandro Mayorkas said he's "very pleased" that the U.S. Supreme Court has allowed the Biden administration to end Donald Trump's remain in Mexico policy, which served as a deterrent to illegal immigration.

"I think that we are doing a good job," Mayorkas said. And he praised the Biden administration's "multifaceted approach" to illegal immigration:

"We continue to warn people not to take the dangerous journey," Mayorkas said:

"We are enforcing our laws. And we are working with countries to the south, including our close partner, Mexico, but with Guatemala, Honduras, Panama, Costa Rica, Colombia, to really address the migration that is throughout the Western Hemisphere.

"These are remarkably distinct times, and we have a multifaceted approach, not only to work with our partner countries but to bring law enforcement to bear, to attack the smuggling organizations in an unprecedented way. We are doing so very much.

"Ultimately, however -- ultimately, because the border has been a challenge for decades -- ultimately, Congress must pass legislation to once and for all fix our broken immigration system."

Host Martha Raddatz told Mayorkas that Congress is unlikely to pass anything, and the "do not come" message "is not getting out."

"Well, we are continuing to deliver that message, and we will continue to do so," Mayorkas said.

"And for the first time since 2011, the president's fiscal year 2023 budget calls for 300 more Border Patrol agents. And we are hiring case processers. We are addressing this issue vigorously and aggressively, to address the amount of -- the number of encounters that we are experiencing at the southern border."

"Do you think it's working?" Raddatz asked him.

"I think that we are doing a good job. We need to do better. We are focused on doing more, and we are doing it with our partners to the south.

“This is a -- this is a phenomena that not only the United States is experiencing. Colombia now has more than 2 million Venezuelans within its borders. Costa Rica has indicated that 2 percent of its population is Nicaraguan, and that might rise to 5 percent.

"The migration that is occurring throughout the hemisphere is reflective of the economic downturn, increase in violence throughout the region, the -- the result of the COVID-19 pandemic, the results of climate change.

“We're really in a -- in a regional challenge, and we are addressing it with our regional partners. And we'll continue to do so, Martha."