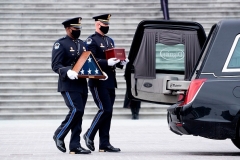 The cremains of Capitol Police Officer Brian Sicknick are carried down the East Front steps to a hearse on Feb. 3 after 'lying in honor' in the Rotunda of the US Capitol. (Photo by MICHAEL REYNOLDS/POOL/AFP via Getty Images)

So contrary to earlier reporting and Democrat claims, Sicknick was not killed by Trump supporters during the January 6 invasion of the U.S. Capitol.

But it's not true. And there's no explanation for why it took so long for the D.C. medical examiner to say Sicknick died of natural causes, not as the direct result of a criminal act.

An early (Jan. 11) report from the New York Times incorrectly stated that Sicknick was "overpowered and beaten by rioters from the mob at the Capitol," but the newspaper later clarified that "New information has emerged...that questions the initial cause of his death provided by officials close to the Capitol Police."

Later, another theory emerged -- that Sicknick may have suffered an allergic reaction to bear spray. In fact, federal authorities arrested and charged two men last month for assaulting Sicknick with bear spray during the attack on the Capitol. Given the latest information, it is unlikely they will face murder charges.

We know that the autopsy on Sicknick was completed sometime prior to February 2, when Sicknick's cremated remains lay in honor at the U.S. Capitol. It may have taken longer for the results of toxicology and other tests to come in. But three months?

Former House Speaker Newt Gingrich tweeted about the timeline on Monday: "Why did it take over three months to determine how Officer Sicknick died? This doesn’t make any sense. Only person killed January 6 was an unarmed woman killed by a policeman. Imagine media outcry if she had not been a Trump supporter. The media narrative has now collapsed."

Conservative commentator Ann Coulter tweeted, "What happened to the fire extinguisher? The bear spray? It kind of looks like the 'insurrectionists' didn't want to kill anyone after all."

And journalist Sharyl Attkisson tweeted, "So are you saying that poor Officer Sicknick’s cause of death was known by at least some -- prior to his cremation weeks before Trump left office but it wasn’t announced (or leaked?) for 2 months?"

In a statement released on Monday, the U.S. Capitol Police said is "accepts the findings" of the medical examiner and "continues to mourn the loss of our beloved colleague."

Working with the U.S. Attorney’s Office for the District of Columbia, the F.B.I.’s Washington Field Office and the Metropolitan Police Department, the USCP will continue to ensure those responsible for the assault against officers are held accountable.

The United States Capitol Police will never forget Officer Sicknick’s bravery, nor the bravery of any officer on January 6, who risked their lives to defend our democracy.

Officer Sicknick’s family requests their privacy be respected during this difficult time.

It's worth noting that on January 8, the day after Sicknick died of natural causes, the Acting Attorney General Jeffrey Rosen -- part of the Trump administration -- issued a statement saying:

"Our thoughts and prayers are with the family and fellow officers of U.S. Capitol Police Officer Brian D. Sicknick, who succumbed last night to the injuries he suffered defending the U.S. Capitol, against the violent mob who stormed it on January 6th. The FBI and Metropolitan Police Department will jointly investigate the case and the Department of Justice will spare no resources in investigating and holding accountable those responsible."

FBI Director: 'We Can't Yet Disclose the Cause' of Officer Sicknick's Death