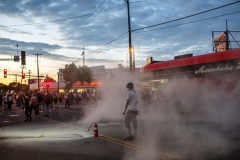 Protesters clash with police during a demonstration over the killing of George Floyd by a policeman outside the Third Police Precinct on May 27, 2020 in Minneapolis, Minnesota. (Photo by KEREM YUCEL/AFP via Getty Images)

(CNSNews.com) - As fury erupted in his city Wednesday night, Mayor Jacob Frey of Minneapolis went on "Prime Time" with Chris Cuomo and expressed his anger about the police officer who killed a handcuffed suspect as the man lay on the ground, complaining he could not breathe.

That officer and three others at the scene on Memorial Day were fired immediately, and Mayor Frey questioned why the officer seen kneeling on George Floyd's neck is "not in jail right now."

Like many of the furious protesters in his city, Frey called for "honesty" and "action." He invoked racism: "We're talking about 400 years' worth of this kind of racism," he said. He called for the release of body camera video, and he demanded "justice" for the black community, for Floyd, and for "our whole city."

As Cuomo brought the interview to a close, Frey also called for peace in a city where a Target store was looted and burned overnight, among other theft and property damage.

(Press reports on Thursday said Frey has now asked the governor to call out the National Guard.)

As the interview began, Frey called video of the Floyd arrest, shot by a bystander, "horrid."

For five straight minutes, a white officer on our police department pressed his knee into the neck of a black man who was handcuffed, who was no threat and was articulating very clearly how he was impacted, how his physical health was being damaged and how he couldn't breathe.

This is not an instance of one or two seconds where you're forced to make a split decision. This is like five minutes. It's 300 seconds, and in any one of those seconds he could have decided just to stop. He could have decided to listen to the community.

Cuomo asked Frey what he would say to other black men like George Floyd, "who hear this story and say, I could be next, that could be me."

And justice is the first step in this case, but it's not just about this case, and we still have a long way to go.

Frey has called for the county attorney to charge the arresting officer.

Frey said kneeling on a suspect's neck is not part of any training or authorized procedure. And he called for the release of body camera video.

“And we have laws at the state level that prevent the automatic release of body cameras, but I want to get them released as soon as is humanly possible, and that means at a point where it's not going to hinder the ultimate charging decision and the investigation that would lead to that charging decision.

“I've made very clear that I think that the arresting officer needs to be charged. That needs to happen. It's an unprecedented move as far as I'm aware in our city or state, but, you know, there's all sorts of protocols and precedents that are, like, baked into the walls of city hall that will tell you that you -- that you shouldn't act, that you shouldn't do this, that you shouldn't speak out because there's something around the next corner. Well, you know what, like, this is an instance where it needed to be said.”

As Cuomo brought the interview to a close, the mayor asked to say "one more thing."