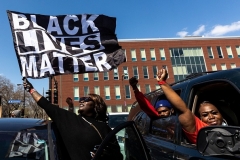 A woman holds a Black Lives Matter flag during the funeral service of Daunte Wright in Minneapolis, April 22, 2021. (Photo by KEREM YUCEL/AFP via Getty Images)

(CNSNews.com) - The Minneapolis suburb of Brooklyn Center has decided that armed police officers should not be the "first, last and only resort" in responding to calls for help.

On Saturday, the city council voted 4-1 to pass police reforms, including the creation of an unarmed Community Response Department that will respond to all calls where a city resident is "primarily experiencing a medical, mental health, disability-related, or other behavioral or social need."

The community responders in those cases will consist of "trained medical and mental health professionals, social workers, or other staff and volunteers." Such calls will no longer be routed to the police department.

The changes approved on Saturday follow the death of Daunte Wright, shot to death on April 11 during a traffic stop by a police officer who said she thought she was reaching for her Taser but grabbed her gun instead. Officer Kimberly Potter is now awaiting trial on a second-degree murder charge.

Mike Elliot, the mayor of Brooklyn Center, told CNN on Tuesday he is chairing the implementation committee that will make sure the changes happen "with great speed, but with great care at the same time."

Our community has made it clear they want a transformed public service -- sorry -- public safety system that sees to it that everybody in our community is -- feels safe and is kept safe. And we believe that these measures are actually going to help us achieve that.

And so by making sure we have a variety of responses that are available when our community is in need, so that police are not -- armed police officers are not the first and only response available to all these different types of need in our community, we believe that we're really moving forward in the right direction, something that is going to, I think, transform our community.

Elliot said arrests for DUI or domestic assaults will continue: "We're going to follow Minnesota law. And our goal is to make sure that we keep people safe. We believe that we have a road map here that's going to ensure that. But at the same time, make sure that we're preventing the kind of deaths we've seen in the case of Daunte and in the case of George Floyd, we believe that the set of measures that we have actually achieve that."

Here's the list of reforms passed by the city council on Saturday:

2. An unarmed civilian Traffic Enforcement Department will now enforce all non-moving traffic violations in the City. The Department will make “appropriate changes in ordinance, practices or policies, including restricting or eliminating the types of traffic infractions enforced by the City’s armed law enforcement patrol officers”;

3. A new Department of Community Safety and Violence Prevention will be responsible for overseeing all city agencies and city efforts regarding community health and public safety, and ensuring a well-coordinated, public health-oriented approach throughout our city that relies upon a diversity of evidence-based approaches to public safety...

4. The new, permanent Community Safety and Violence Prevention Committee will be created and chaired by the Director of the Department of Community Safety and Violence Prevention. The majority of committee members "must be City residents with direct experience or the close experience of immediate family members...being arrested, detained, or having other contact with Brooklyn Center Police.” The committee will review and make recommendations regarding the police response to recent protests, review any draft collective bargaining agreement involving the Police Department, and provide comments to the City Manager and City Council before and during contract negotiations, make recommendations on creating a separate and permanent civilian oversight committee for the new Department...

5. The City of Brooklyn Center will "more appropriately regulate the use of force by its armed law enforcement officers including by appropriate changes in ordinance, practices or policies requiring de-escalation, exhaustion of reasonable alternatives before using deadly force, prohibitions on using deadly force in certain situations, including firing upon moving vehicles, prohibiting certain uses of force or other policing tactics during First Amendment protests and assemblies, and similar policies";

6. "To ensure the peace and safety of all City residents while this Resolution is being fully implemented, the City Council directs the City Manager to implement forthwith a citywide 'citation and summons' policy requiring officers to issue citations only, and prohibiting custodial arrests or consent searches of persons or vehicles, for any non-moving traffic infraction, non-felony offense, or non-felony warrant, such emergency policies to stay in effect until repealed or modified by subsequent resolution or ordinance adopted pursuant to this Resolution..."

7. Brooklyn Center will create a Community Safety and Violence Prevention Implementation Committee (“Implementation Committee”), including residents and experts from Brooklyn Center and other local, state and national experts in public health-oriented approaches to community safety as appointed by the Mayor, that will draft any and all amendments, ordinances, resolutions, policies, guidelines or other recommendations for the review, adoption and/or implementation by City Council or City staff, as appropriate, that would fully implement the will and intent of City Council as expressed in this Resolution;"

8. The Implementation Committee will be "intentional about ensuring the community fully understands the implementation plans and has the opportunity to comment upon them..."

9. The City Attorney, City Manager and Chief of Police and other City personnel will provide all necessary assistance and support to all the committees created pursuant to this Resolution, including by supplying the committees with any and all needed data, budgetary, staffing or other information, and assisting with the crafting of amendments, ordinances or policies as requested by the Implementation Committee.