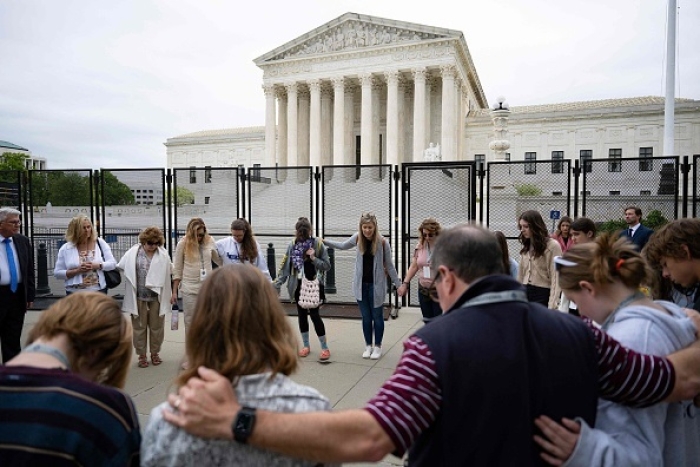 Pro-life demonstrators pray near the fence now ringing the US Supreme Court on May 5, 2022. (Photo by JIM WATSON/AFP via Getty Images)

(CNSNews.com) - Republican Gov. Tate Reeves of Mississippi told CNN's Jake Tapper on Sunday he really appreciated Tapper's question about how many women and girls will die if Roe v. Wade is overturned, triggering an abortion ban in that state.

"We have started doing the hard work of what a post-Roe Mississippi will look like," Reeves said:

"In fact, we believe that if, in fact, this leaked opinion is accurate and if, in fact, a majority of the justices on the Supreme Court are going to overturn Roe, we must understand that, while this is a great victory for the pro-life movement, it is not the end.

"In fact, it is just the beginning. And the beginning is we must show that being pro-life is not just about being anti-abortion. And so, in our state, that -- the work that is being done goes in two directions.

"Number one, and we have to do everything we can to make it easier on those moms who may be in unwanted pregnancies. And that's the reason that we this year -- just in the last couple of weeks, I have signed legislation to provide help and resources and money to the 37 pregnancy resource centers that are located in every region of our state.

"We want to make sure that we get those individuals, ladies and women and expectant mothers, the help that they need from a health care standpoint, but it's not just about the health care. It's about other resources that are available to those moms.

"And the second piece of being prepared and the second -- and the next phase of the pro-life movement is about, what are we doing to help those babies that maybe are -- they do go to full term that the moms do have? And what we're trying to do is focus on making adoption easier in Mississippi. We're focusing on improving our foster care system."

Reeves said the state is investing more than $100 million "to improve technology at the Department of Human Services and at our Child Protection Service."

Several times in the interview, Reeves repeated his view of where the pro-life movement goes next:

Tapper asked Reeves "a philosophical question" -- whether he believes life begins at "the moment of fertilization or the moment of implantation?"

"I believe that life begins at conception," Reeves said.

"And, as I have said repeatedly -- and I know where this question is ultimately going with respect to birth control and other measures -- I want to be clear. My view is that the next phase of the pro-life movement is focusing on helping those moms that maybe have an unexpected and unwanted pregnancy.

"The next phase of the pro-life movement is making sure that those babies, once born, have a productive life. And while I'm sure there will be conversations around America regarding that, it's not something that we have spent a lot of time focused on."

Reeves noted that there is no fundamental right to abortion in the Constitution, and he said it would be correct for the Supreme Court to rule that individual states should decide the issue for themselves.

Tapper, spouting the Democrat line, pressed Reeves on whether Mississippi would ban IUDs or Plan B, which Tapper described as "methods of birth control that might not allow a fertilized egg to be implanted."

"That is not what we're focused on at this time," Reeves said, adding that he'll wait to see the final Supreme Court ruling in the case, which involves Mississippi's ban on abortions after 15 weeks.

Tapper also asked Reeves if he would want the Supreme Court to overturn the decision legalizing same-sex marriage.

"And that's why it's important folks like me take this opportunity to stand up and speak on their behalf. So that's a very important differentiating factor."