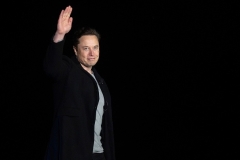 (CNSNews.com) - "Morning Joe" anchor Mika Brzezinski on Friday left no doubt about where she stands on speech she doesn't like.

She not only slammed Twitter as "Donald Trump's playground to be...cruel toward people," but she also called Elon Musk's attempted takeover of Twitter a "very dangerous precedent."

To help Brzezinski buttress the Musk-bashing, MSNBC brought on a little-known columnist who slammed Musk as a "petulant billionaire" and -- yes, of course -- a "racist."

"Let's turn to the platform that used to be Donald Trump's playground to be rude and insensitive and cruel toward people, Twitter. Twitter's board is reportedly evaluating billionaire Elon Musk's offer to buy the company. He has been critical of the company's decision to suspend users who tweet threats of violence, hate speech or harmful misinformation.

"Musk says he believes Twitter needs to be transformed as a private company. It's unclear how he will finance a potential purchase, but he said yesterday he's not interested in making money off the platform.

"Joining us now, columnist at (Business) Insider, Linette Lopez, who has a few thoughts about this. Her latest piece is entitled Elon Musk's attempt to buy Twitter represents a chilling new threat: Billionaire trolls taking over social media."

"So let's look at an excerpt from your piece, Linette," Brzezinski said, quoting from the column as follows:

"Musk, as a Twitter user, has trafficked in much more than stupid memes. He was the super-spreader of COVID misinformation.

"Theoretically and in practice, it makes sense that someone who uses a platform so recklessly should be thrown off that platform. Donald Trump used Twitter to foment a movement that culminated in a riot-turned-insurrection, and he was banned. Musk is using his money to insure that he doesn't suffer the same fate, pressuring Twitter into accommodating his behavior, and by extension, behavior like it on the platform.

"One has to assume that other petulant billionaires are taking note.

"It has taken years of failures for Twitter to separate the concept of free speech from the practice of moderating its platform. Now in comes Musk, hell-bent on muddying the waters again.

"Don't be confused. Whatever Musk is using his billions to do with Twitter isn't about high-minded ideals or making the platform better for users as a whole. It's about Elon Musk."

'When words mean things, we have to take that seriously'

"I think that you bring up a great point," Brzezinski said after quoting from the column. "But, Linette, are there any ways to stop him if he wants to buy Twitter? Are there any guardrails around something like this? Because this could be a very dangerous precedent."

"I think shareholders have been pushing Twitter to kind of be the be the vanguard of labeling misinformation, kicking off bad actors, moderating behavior, moderating speech. I think it's important to note that Elon doesn't just think that dangerous speech is like, whatever, on Twitter.

“In real life he has allowed dangerous speech, like racist speech, violent speech to fester at his factories, which is why Tesla is being sued for discrimination in California.

“You know, he wrote a letter to his staff back in 2017 saying, hey, if somebody says something racist to you, you know, just take it on the chin, and if you're a minority, you're not allowed to be a jerk, either. Essentially, putting racist language on the same level as, you know, just people being jerks.

“There’s not the same. You know, the connotation and the humanization of racist language led to black people at his factories being treated like garbage, you know, having to clean the floors and do the most menial tasks at Tesla.

"This is a real -- he does not believe in the consequences of words. And when words mean things, we have to take that seriously. For a man with tens of millions of followers not to take it seriously and then to want to own the company is ridiculous.

“Also, he has a Twitter sitter. He's not allowed to tweet things about Tesla without legal review because he used Twitter to commit fraud. I mean, wow. What grown (sic) person."

Lopez said Twitter employees are "terrified" about the prospect of Musk buying the company -- "everyone is freaking out" because "they know he creates toxic work environments."

She said, "Elon is mostly doing this because it amuses him and he enjoys watching people freak out when he does things."

"So we'll see how this plays out," Lopez concluded. "But I think the board has a real argument for saying, look, we've made changes to our mod indication for the good of the platform, for the health and safety of our community and the country and the world, and this guy is trying to set us back.

Although Musk might find the comments above "damn annoying," he might also be the first to say, speak your minds: