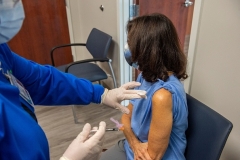 (CNSNews.com) - Dr. Francis Collins, director of the National Institutes of Health, admitted on Sunday that Americans are "confused about different messages" regarding COVID, some of them coming from him (and President Biden):

"Doctor, you predicted earlier this month that it may well be boosters are going to be recommended for almost everybody. That didn't happen on Friday. Do you still...expect broad approval?" Margaret Brennan, host of CBS's "Face the Nation," asked Collins on Sunday morning:

"You know, we have to see how this plays out over the coming weeks, because the data changes every day," Collins responded:

I do think it was very significant that the FDA Advisory Committee voted unanimously in favor of offering boosters to people 65 and over and to others who have high-risk exposures, like health care professionals. So we're starting down that path.

They weren't convinced yet that the data required this for younger individuals who aren't at high risk. But I think some of the data we're seeing coming in, especially from Israel, tells me that it's likely that they will get to that point.

But this was a start. And I know people were confused about different messages. But, in a certain way, Margaret, this is the way it ought to be, science sort of playing out in a very transparent way, looking at the data coming from multiple places, our country, other countries, and trying to make the best decision for right now. That's what they did.

Brennan followed up: "But, as a medical professional, your view is a third dose of the Pfizer vaccine will be necessary for everyone?"

"You know, yes, I am a physician, a scientist. I'm not a politician. I'm trying to figure out what's the best answer here," Collins responded:

"The place that might still be somewhat questionable would be the very youngest individuals. Is the benefit/risk needed there? But, certainly, I think there will be a decision in the coming weeks to extend boosters beyond the list that they approved on Friday."

On Friday, the FDA recommended booster shots only for "high-risk" individuals, including senior citizens 65 and older.

Collins told Brennan he thinks teachers could be viewed in the same high-risk category as health care providers are, because they spend a lot of time with young children who cannot be vaccinated.

So Brennan asked him, "And what does that mean for people like me who live with unvaccinated children? Does that put me in a high-risk category?"

"Margaret, that is a great question," Collins said. "And I think that is one the CDC will probably have their committee discuss in some seriousness on Wednesday and Thursday, because, yes, you are in a circumstance with younger kids who can't be immunized, where it is more likely that you could be exposed than somebody who's living alone."

Brennan also asked Collins about mixing vaccines -- getting a Pfizer booster, for example, when their first shots were Moderna or Johnson & Johnson:

"So, we are right in the middle of those trials to see, can you mix and match?" Collins said:

Any one of the three that have emergency use authorization, can you start with one and boost with the others?

We're going to know more about that just in the course of the next two or three weeks. Right now, we don't have the answer. Moderna and J&J, by the way, have also submitted their booster data, so it's likely that FDA will be able to have a comment on that pretty soon. It's not quite in sync here.

So, people who got Moderna -- that would be including me -- need to sort of hang on here and see what the recommendation is for those of us who were interested in a booster.

And people shouldn't be rushing out right now and getting a booster before it's actually gone through this process. A fair number of people seem to be doing that. Hang on, people. Let's be clear.

The vaccines right now in the U.S. are doing a great job of protecting people against severe disease, hospitalization. What we're worried about is, that it's beginning to erode and we're seeing more breakthrough cases. And we don't want to get behind this virus. We want to stay ahead of it.

On August 18, President Biden spoke about his administration's COVID response, telling Americans that pending FDA approval, "We'll be ready to start these booster -- this booster program during the week of September 20, in which time anyone fully vaccinated on or before January 20 will be eligible to get a booster shot."

"And it’s the best way to protect ourselves from new variants that could arise," Biden said. "Just remember, as a simple rule — rule: Eight months after your second shot, get a booster shot."

That may be why some Americans are "rushing" to get a booster, as Collins noted.

Friday's FDA announcement limiting boosters to high-risk people is another example of the Biden administration seeming to promise one thing, then delivering another.

Collins said "part of the reason" for all the talk about booster shots in recent weeks was to "get all the pharmacies, all of the other preparations together, so there wouldn't be a mad dash at the end to try to actually implement this."

"You know, I kind of think about this like when you're preparing for a hurricane. We have a system that starts noticing a tropical disturbance somewhere out there in the Atlantic long before there's a risk that it's going to hit New Orleans. This is good. That's kind of what we're trying to do with COVID 19," Collins said.