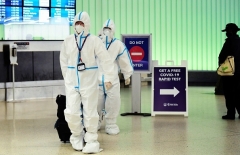 (CNSNews.com) - It was delta yesterday, it's omicron today, and who-knows-what tomorrow:

"It's certainly possible" that omicron "is not the last emerging variant that will attract a lot of attention and a lot of concern," Dr. Francis Collins, director of the National Institutes of Health, told NBC's "Meet the Press" on Sunday.

This one does have the largest number of mutations that we've seen so far, Omicron, with about 50 mutations, compared to the original Wuhan virus.

And it looks as if they probably arose in an immunocompromised individual -- this is a hypothesis, but it seems plausible-- who wasn't able to completely fight off the virus. And so, it remained in the system, maybe for months, in that person until they finally got over it. And that is, of course, a perfect situation for the virus to be able to pick up additional mutations along the way.

To the extent that that's going to keep happening if we don't have adequate immune protection across the globe, yes, we're probably going to see something and we'll have to use some of the other letters in the Greek alphabet.

Collins said it's too early to predict what impact the omicron variant may have as it spreads around the globe:

"In the real world, does this in fact turn out to be less dangerous?" he asked. "And how good are our vaccines and our boosters in providing protection? Because we think they're probably going to be useful, but just how useful? That's an answer everybody wants.

"The scientists are all over this. We were kind of expecting that this would come along at some point. People are hard at work, 24/7, to get those answers."

Host Chuck Todd asked Collins if he would advise Americans to rethink their holiday travel plans:

"Well, I think people need to pay close attention to all those recommendations that maybe we've gotten a little sloppy about," Collins said. He said masking in public places and on "travel conveyances" and in places where unvaccinated people are present remains "very important."

He gave a personal example:

"We had a little holiday party on my cul-de-sac last night. And the people who organized it said you're not coming to our house unless you prove you're vaccinated and you got a test that day. So, yes, here's my test. I'm glad to say I was negative.

"That is maybe the kind of thing for holiday gatherings we should be doing more of as well."