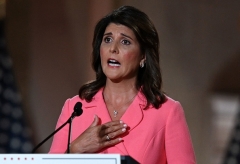 (CNSNews.com) - Former South Carolina Gov. and U.N. Ambassador Nikki Haley is mulling a run for president to "bring sanity back to our domestic policy" and to "start focusing on our foreign policy in a way we haven't done in a while."

Last year, Haley said she wouldn't run if President Trump goes for a second term, but on Sunday, she told "Fox News Sunday" that "President Trump will decide for himself if he wants to run again."

"What I will tell you is we need to snap out of it. This is absolute craziness. We've got enemies trying to come after us and America has been naive, it's been a weak, and it's been asleep at the wheel.

"But we need to get America strong again. We need to start focusing on our foreign policy in a way we haven't done in a while, and we're going to need to focus on it for the next 20 years.

"I'll do whatever I can to make that happen."

In the meantime, Haley said she's endorsing, campaigning and fund-raising for Republican candidates in the midterms.

"We're going to fight to win," she said:

"But let me remind you and Americans, Mike, winning is half the battle. Proving they deserve to be there when they win is the other half of the battle. We expect every person that is elected in November that they should fight on their first day. They shouldn't wait until 2024.

"We need to see Congress putting bills on Joe Biden's desk. He can't veto everything. Instead of jumping on TV and fighting and showing rhetoric, we want to start seeing Congress get something done.

Let's get to work. We've got to do that for Americans right now."

She said House Speaker Nancy Pelosi "was right to go to Taiwan"; she said "China is trying to bully us the same way they try and bully their own people, and we shouldn't have it." And she said the U.S. should be sending Taiwan the defensive equipment and training that they need, "and we should just stand strongly with them" so "China will realize they need to back off."

She said "it's important" to get them home -- "But what I will tell you, this is the wrong way to go about doing it. When you start to get into prisoner swaps -- this is not a Russian hockey player we're talking about that they want to swap. This is a Russian arms dealer that was giving terrorists weapons to kill Americans.

"Make no mistake: that is dangerous. And if you do this prisoner swap, this is letting Russia know and every enemy we have know, get as many American hostages as you can, because that's how we'll get all our terrorists back home.

"That is not the way to do it. We need to get these two Americans home, but you don't do it with prisoner swaps with people that are trying to kill Americans," Haley said.