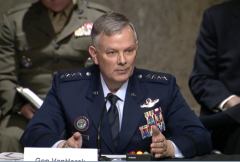 (CNSNews.com) - General Glen VanHerck, the commander of the U.S. Northern Command, told the Senate Armed Services Committee on Thursday that China and Russia are "very aggressive and active all across the NORTHCOM AOR (area of responsibility), including in the Bahamas and Mexico."

"I would point out that the largest portion of the GRU members in the world is in Mexico right now. Those are Russian intelligence personnel, and they keep an eye very closely on their opportunities to have influence on U.S. opportunities and access."

VanHerck told the committee that transnational criminal organizations operating in Mexico create "instability" with their drug dealing and human trafficking, "and we see that right on our border in Mexico.

"My concern with that is...the opportunity it creates for actors such as China, Russia and others who might have nefarious activities on their mind -- to seek access and influence in our AOR from a national security perspective."

The Russians are coming

Government data shows that the number of Russians attempting to cross illegally into the United States is rising significantly.

So far this fiscal year -- in just the five months starting last October -- Customs and Border Protection says it has encountered 7,191 Russians trying to enter the United States illegally at the southwest border.

The CBP chart posted below shows the increasing number of Russians encountered month by month.

General VanHerck devoted an entire section of his opening statement to the threat post by Russia:

"Russia is the primary military threat to the homeland, and their focus on targeting the homeland has provided the model other competitors are beginning to follow," VanHerck wrote.

"First, Russia has invested significant resources to modernize all three legs of its nuclear triad in an effort to ensure its ability to deliver unacceptable damage on our homeland during a conflict. In December 2019, Russia fielded the world’s first intercontinental ballistic missiles (ICBMs) equipped with a hypersonic glide vehicle (HGV) payload. These weapons are designed to glide at extremely high speeds and maneuver at low altitudes in order to complicate our ability to detect and track.

"In the next few years, Russia seeks to field a new heavy-lift ICBM that President Putin claims will be able to deliver nuclear warheads to North America from both northern and southern trajectories. Weapons such as these are designed to circumvent the ground-based radars utilized by US NORTHCOM and NORAD to detect and characterize an inbound threat, and challenge my ability to provide threat warning and attack assessment."

You can read his full opening statement here: