Not Bad: Labor Force Participation Slightly Higher in May; Unemployment Rate Sticks at 3.6% 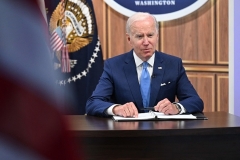 (CNSNews.com) - Non-farm payrolls added 390,000 jobs in May, better than the consensus estimate of 350,000, the Labor Department's Bureau of Labor Statistics reported on Friday.

In a positive move, the labor force participation rate moved up slightly.

In May, the civilian non-institutional population in the United States was 263,679,000. That included all people 16 and older who did not live in an institution, such as a prison, nursing home or long-term care facility.

Of that civilian non-institutional population, 164,376,000 were participating in the labor force, meaning they were either employed or unemployed -- they either had a job or were actively seeking one during the last month. This resulted in a labor force participation rate of 62.3 percent in May, up from 62.2 percent in April, but still a tenth of a point lower than the 62.4 percent achieved in March.

The participation rate was 61.4 percent when Joe Biden took office. Today's number, 62.3 percent, is still below the Trump-era high of 63.4 percent in February 2020, just before COVID shut things down.

BLS said there were 11,400,000 job openings on the last day of April. But there are only 5,950,000 unemployed people, meaning they want a job and have actively looked for one in the prior 4 weeks. That's roughly two job openings for every unemployed person.

Notable job gains in May occurred in leisure and hospitality, in professional and business services, and in transportation and warehousing. Employment in retail trade declined over the month.

The change in total nonfarm payroll employment for March was revised down by 30,000, from +428,000 to +398,000, and the change for April was revised up by 8,000, from +428,000 to +436,000. With these revisions, employment in March and April combined is 22,000 lower than previously reported. (Monthly revisions result from additional reports received from businesses and government agencies since the last published estimates and from the recalculation of seasonal factors.)

President Biden is expected to comment on the latest employment report later this morning.

In its ten-year (2022-2032) Budget and Economic Outlook, issued in late May, the Congressional Budget Office predicted that conditions in the labor market would "continue to improve in 2022."

It also expects employment to grow by 4.1 million jobs and surpass its pre-pandemic (February 2020) level in the middle of this year.

CBO expected the average rate of unemployment to declines through 2023, reaching 3.5 percent, which is a tenth of a point less than it is now. "The annual average has not been lower than that since 1953," CBO noted.

CBO said it expects the unemployment rate to remain below or near 4.0 percent for the next several years.

The size of the labor force, which, in early 2022 remained roughly one million people below its pre-pandemic level, is expected to keep increasing, exceeding that level by the end of 2022.