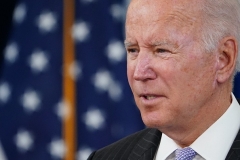 (CNSNews.com) - In November, 99,977,000 people in this country did not have a job and were not looking for one -- a decrease of 473,000 since October and the lowest number since Joe Biden became president, the Labor Department's Bureau of Labor Statistics reported on Friday.

Among those not in the labor force in November, 1.2 million people said were prevented from looking for work due to the pandemic, little changed from October.

Yet, in November, more Americans were working or looking for work.

In November, the civilian non-institutional population in the United States was 262,029,000. That included all people 16 and older who did not live in an institution, such as a prison, nursing home or long-term care facility.

Of that civilian non-institutional population, 162,052,000 were participating in the labor force, meaning they either had a job or were actively seeking one during the last month. This resulted in a labor force participation rate of 61.8 percent in November, up 0.2 points month-to-month, and the best showing since Biden took office.

(The 162,052,000 labor force participants mentioned above is the sum of the employed and the unemployed.)

After rising for more than three decades, the overall labor force participation rate peaked at 67.3 percent in early 2000, then started drifting down, a situation attributed partly to the rising number of retiring baby boomers.

This produced an unemployment rate of 4.2 percent, down from 4.6 percent in October.

Notable job gains occurred in professional and business services, transportation and warehousing, construction, and manufacturing. Employment in retail trade declined over the month.

BLS said 210,000 jobs were added to nonfarm payrolls in November, about half of the 573,000 jobs analysts were expecting.

Notably, the November report covers the period before the world learned about the omicron variant of the coronavirus.

At a hearing before the Senate Banking Committee earlier this week, Federal Reserve Board Chairman Jerome Powell said, "It has been a bit of a surprise that we haven't had more of a recovery" in the labor force participation rate.

"And I really think the single most important thing is to get past the pandemic, then we're really going to know how permanent this is. People get surveyed and they do say substantial numbers of people are concerned about going back to work at a time when the pandemic is still moving around. And so, I think that's the key -- which means more vaccination, more boosters."

Appearing the same hearing, Treasury Secretary Janet Yellen agreed that "in the short run, vaccinations and increasing the number of people who have boosters to get the pandemic under control, to reduce the number of cases, that's the single most important thing we need to do to create an environment in which people feel it's safe to work."

At that same hearing of the Senate Banking Committee, Sen. Tim Scott (R-S.C.) said, "We celebrate a 4.6 percent unemployment rate. But what we've sometimes missed is the fact that when we have fewer people looking for work, your unemployment rate goes down because your long-term unemployment goes up, which means that your labor force participation rate also goes down."

BLS describes labor force participation as an important labor market measure because it represents the relative amount of labor resources available for the production of goods and services.

Also, people who work contribute payroll and Social Security taxes that help support programs for people who do not work.