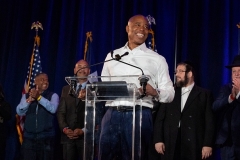 NYC's new Mayor Eric Adams invites controversy with some of his recent appointments. (Photo by Andrew Lichtenstein/Corbis via Getty Images)

Adams told CNN's "State of the Union" on Sunday that a "conflict of interest board" will decide whether Bernard can accept the job his brother offered him:

"But let me be clear on this," Adams said:

My brother is qualified for the position. Number one, he will be in charge of my security, which is extremely important to me in a time when we see an increase in white supremacy and hate crimes, I have to take my security in a very serious way.

But at the same time, I need that right balance. I don't want the people of this city to believe that their mayor is not approachable and he's not willing to engage with them on the level that I want to represent you.

So I took the subway system when -- my day one in office, and those are the types of things that I'm going to do. My brother has a community affairs background, the balance that I need. He understands law enforcement. He was a 20-year-old retired veteran from the police department. And I need someone that I trust around me during these times for my security. And I trust my brother deeply.

"I'm sure you know he was named an unindicted co-conspirator in a federal corruption probe and resigned in 2014 after being accused of accepting bribes in return for favors. We should note that he denies that vociferously. But are you worried at all about the message you're sending by appointing someone with that record to be your number two?" Tapper asked Adams.

"Not at all," Adams replied:

I believe that Phil acknowledges there were some real mistakes and errors that were made. He was not accused of a crime.

I think that, when you look at what happened yesterday in this city, a young person was shot in a robbery in a store. It really personifies why I need the best person for the job. I can't leave bad people doing bad things, the good people on the bench, when I have a talented person that just made some bad calc -- bad decisions.

He didn't do anything that was criminal. Phil is a great person, the right time to do this job. He rose to be the chief of the New York City Police Department during a time when we had to bring down the abuse of stop and frisk, we had to bring down gun violence and crime.

And I'm excited about having him on the team with all the other team members that I put together to deal with public safety, which I say is the prerequisite to public -- to prosperity, public safety and justice.