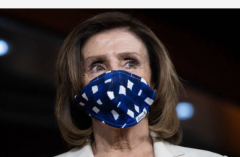 (CNSNews.com) - House Speaker Nancy Pelosi (D-Calif.), in a CBS Radio interview on Tuesday, called the Senate police reform bill "unsalvageable," and she accused Senate Republicans of "trying to get away with murder, actually, the murder of George Floyd.”

The point, Steve, is the following. They understand that there’s a need to get something done. The press has given them so much play for this bare leaves, unsalvageable piece of legislation. And then say, well, can’t you compromise with that. No, because it is no, and we are yes. It isn’t maybe.

In other words, for something to happen, they’re going to have to face the realities of police brutality, the reality of the need for justice in policing and the recognition that there are many, many good people in law enforcement, but not all, and that we have to address those concerns.

So, when they admit that, and have some suggestions that are worthy of consideration -- but so far they were trying to get away with murder, actually, the murder of George Floyd.

I think it's fair to say that the issue of police reform is personal to @SenatorTimScott, and that he knows a lot more about it than Nancy Pelosi ever will. Her insinuation that he—or any member of Congress—is complicit in murder is disgusting and beneath the office she holds.

Senate Majority Leader Mitch McConnell (R-Ky.) on Wednesday called Pelosi's comment about trying to get away with the murder of George Floyd "jaw-dropping."

"That's the speaker of the House?" he asked. "Accusing Senate Republicans of trying to get away with murder?

You're beginning to see how this game works. Two weeks ago, it was implied the Senate would have blood on our hands if we didn't take up police reform.

Now Democrats say Senator Scott and 48 other senators have blood on our hands because we are trying to take up police reform. What fascinating times we live in, Madam President. Armies of elites and Twitter mobs stand ready to pounce on any speech they deem problematic, and yet unhinged comments like these get a complete free pass. Complete free pass.

When our country needs unity, they're trying to keep us apart. When our nation needs bipartisan solutions, they're staging partisan theater. This is political nonsense elevated to an art form.

Pelosi is touting the House bill, which, among other things, would hold police officers personally liable for damages in civil lawsuits.

"Imagine you're thinking about becoming a police officer and you think you're going to be personally liable for every fracas you try to break up. Some think you don't become a police officer in that circumstance.

"Other things, well you just stay in the police car and don't ever get out because you could end up getting yourself sued over it all."

Sen. Tim Scott (R-S.C.), who produced the Republican Justice Act, said Democrats and Republicans "have about 70 percent in common" when it comes to police reform.

"I'm willing to have that conversation on qualified immunity, Section 1983. The importance of protecting the law enforcement officer is paramount to having character driven law enforcement," Scott said.

"What we saw over the weekend, it could be a foreshadowing of events. In Atlanta, out of the six zones, three zones had a significant reduction in responses. Why is that? Well, when an officer has to second guess what the consequences are, that is an interesting engagement."