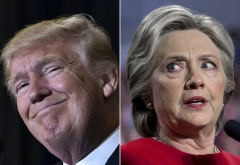 Republican Donald Trump defeated Democrat Hillary Clinton in 2016. Is a rematch in the offing? (Photos by MANDEL NGAN, BRENDAN SMIALOWSKI/AFP via Getty Images)

(CNSNews.com) - As President Joe Biden's poll numbers sink along with those of his vice president, Democrats are casting about for a viable presidential candidate in 2024.

And so it is that Hillary Clinton's name has resurfaced, pushed by former adviser to Bill Clinton, Douglas Schoen, who wrote in a Wall Street Journal op-ed: "Joe Biden and Kamala Harris have become unpopular. It may be time for a change candidate."

Well, look, Laura. You talked about a Democratic Party moving too far to the left. You know from our prior conversations I absolutely agree. But now Hillary’s agreeing. She is talking about doing what we did for Bill Clinton back in the mid-'90s which is moving him back to the center

And look, people reinvent themselves. I think Hillary can. And in the land of the blind, you need the one-eyed man. She is clearly better than anything the Democrats have. Biden is a failed president, as you said. Kamala Harris, arguably worse. Mayor Pete, I really think, is a nonstarter.

So Secretary Clinton, the same way Richard Nixon repositioned himself in 1968 after his defeats in '60 and '62, is my party's best hope.

Schoen said the Democrats don't have a "deep bench" from which to choose a viable presidential candidate: While some Democrat governors "have done some things right...I think it's fair to say none of them are ready for national leadership in the way Bill Clinton was in 1992," Schoen said.

"So if we have to go back to the '90s or to the 2000s and have Secretary Clinton re-positioned and reinvigorated for the 2024 election, so be it."

The question for Republicans is whether Donald Trump can win a presidential primary, now that Trump is bluntly signaling that he plans to run again.

Schoen noted that Trump "is ahead in the polls."

"I think his policies certainly look better now than the Biden policies, even though I was not and am not a supporter of President Trump. Policy is policy.

“And I think that a rematch between the two is more likely today and then we would have ever imagined, even a couple of months ago. And Secretary Clinton is really, I think, the only viable national candidate that we Democrats have as we face historic midterm defeats.”

Schoen described Clinton as "an energetic person who has one over-arching ambition, Laura. And that ambition is to be president.

“She will do everything in her power to get through a campaign, get through it vigorously. In this era of virtual campaigns, if she is out on the stump even half the time, that's 100 percent more than Joe Biden was in 2020."

Biden's poll numbers sank to a dismal 33 percent in the latest Quinnipiac poll.