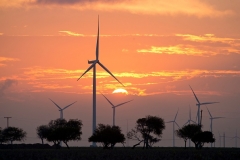 Windmills line the skyline of south Willacy County near the Texas-Mexico border. Texas one of the nation's leading wind energy generator (Photo by Robert Daemmrich Photography Inc/Corbis via Getty Images)

Carlson said the power outage was "proving the point that we're making" -- that it's the government's responsibility to provide reliable power during life-threatening cold snaps, and green energy is not up to the job.

"So the point is, you need to have a diversity of energy sources, no matter where you are, and it couldn't be a greater example of that in the State of Texas right now," Perry said.

"We've got massive amount of wind farms out in West Texas that are frozen up, they are just like a propeller on an airplane, they froze up last night, no wind out there. All of that wind energy was lost."

Perry said it's the job of elected officials to "look over the horizon," to anticipate challenges like the one Texas is facing right now, with snow and freezing temperatures in a state unaccustomed to such extremes.

(The temperature dropped to one degree Fahrenheit in Dallas overnight, as millions of people in Texas and other southern states shivered through the dark night.)

"Having a diverse base load of energy is incredibly important," Perry said. In Texas, he noted:

We've got to have an energy supply that is diverse, a baseload that, you know, when you call on it, it's going to be there. That means that fossil fuels have to be a part of that.

We've got to use -- I mean, liquefied natural gas, I mean, natural gas is abundant in this country. We have stepped away from our nuclear energy, compact fusion reactors. I'm telling you, we ought to be looking at all of the different ways to use fusion reactors. There's some great progress being made in that field right now.

And I don't hear the current administration, I don't hear the Green New Deal talking about anything other than wind and solar and those are fine. You can use them. Have them out there. We certainly have that diversity in the State of Texas.

Carlson raised the issue of "weak politicians" who believe fossil fuels are "evil," and therefore, they are determined to eliminate them "no matter how many people freeze to death."

Perry said in the world envisioned by people like green energy advocate Rep. Alexandria Ocasio-Cortez (D-N.Y.), the United States in ten years would run only on alternative energy, including solar and wind.

"And if you don't have power to keep you warm, you're going to die," Perry said. "I mean, there are countless lives that could be lost with this type of reckless adhering to a philosophy that quite frankly is not scientific.

"We're using more energy in Texas today than we've used historically in the hottest time of the summer. You've got to be planning ahead for all of this," Perry said.

Biden's goal is to "lead a clean energy revolution that achieves a carbon pollution-free power sector by 2035 and puts the United States on an irreversible path to a net-zero economy by 2050."

Another order bars new oil and natural gas leases on public lands or offshore waters "to the extent possible."

On his very first day in office, Biden signed executive orders rejoining the Paris Climate Accord and revoking the presidential permit granted to the Keystone XL pipeline, instantly eliminating thousands of current and future good-paying jobs.