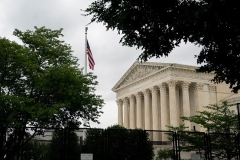 The US Supreme Court as seen on the day it handed down its ruling on the praying coach, on June 27, 2022. (Photo by STEFANI REYNOLDS/AFP via Getty Images)

(CNSNews.com) - It took around seven years, but high school football coach Joseph Kennedy says he's heading back to the playing field in Bremerton, Washington, after the Supreme Court upheld his First Amendment right to pray silently on the 50-yard line after games. Some of the players joined him in prayer; others objected.

"It just feels good to know that the First Amendment is alive and well," Kennedy told Fox News on Monday.

Kennedy said his legal victory is a victory for others public employees: "I think about the teachers. I think about the janitors, the lunch people - everybody that works in the school district is - that's a lot of people in this country. And everybody who was keeping their eye on all of this to see what their rights are going to be, are they going to be taken away?

"And it just shows that, hey, it doesn't matter what your faith is or if you have no faith, it just proves that, you know, this is America and the First Amendment applies, and nobody should have to worry about -- now, especially, have to worry about, just because you want to thank God, you could do it now, and that's just an awesome thing for everybody."

Fox News anchor Sandra Smith asked the coach if his legal battle was worth it -- would he do it all again?

"Yes, I would," Kennedy said. "You know, I would think a couple times before I do the whole seven years and losing the first five times, but absolutely 100 percent worth it, knowing that I fought for the right thing and ended up winning and knowing that justice is done, and the freedoms are good.