Psaki: DUIs, Assault Not 'Acceptable Behavior' -- But They're Not Deportable Offenses, Either 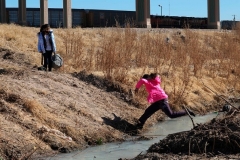 A girl jumps across the Rio Bravo to get to El Paso, Texas, from Ciudad Juarez, Mexico on February 5, 2021. (Photo by HERIKA MARTINEZ/AFP via Getty Images)

(CNSNews.com) - The Washington Post reports that U.S. Immigration and Customs Enforcement (ICE) will no longer deport illegal aliens convicted of drunken driving, simple assault, and other supposedly lesser crimes under new guidelines expected to come out of the Homeland Security Department this week.

"Well, first, it's guidelines that would be put out by the Department of Homeland Security, and I'd certainly send you to them. They have a confirmed secretary now, but the priority for the enforcement of immigration laws will be on those who are posing a national security threat, of course public safety threat, and on recent arrivals," Psaki said.

"Nobody is saying that DUIs or assault are acceptable behavior, and those arrested for such activity should be tried and sentenced as appropriate by a local law enforcement. But we're talking about the prioritization of who is going to be deported from the country."

The reporter asked Psaki if this is the kind of change Biden was talking about during the presidential campaign:

"Well, I think the kind of change he was talking about was putting forward an immigration bill at a time where modernization of immigration is long overdue that addresses not only a pathway to citizenship, but puts in place smart security measures and addresses the root causes of these issues in the countries in Central America.

"So, I think that's primarily what he was referring to, but also prioritization which, again, would be up to the Department of Homeland Security. To ensure our focus is on the individuals who pose the greatest national security threat is also something he's long supported," Psaki said.

According to the Washington Post: "U.S. Immigration and Customs Enforcement is preparing to issue new guidelines to agents this week that could sharply curb arrests and deportations, as the Biden administration attempts to assert more control over an agency afforded wide latitude under President Donald Trump, according to internal memos and emails obtained by The Washington Post."

"I mean, when you see them blow off DUIs, I wonder if the Mothers Against Drunk Driving were supporting Joe Biden knowing he was going to turn down drunk drivers loose...And to Jen Psaki's comment about, well, it's just about priorities. No, no, they are funneling down the number of deportations dramatically by these limitations.

“They're trying to basically say, if he didn't provably murder or rape somebody, you don't get deported. Well, that doesn't leave ICE a lot to do, and yet we have 11 million, maybe tens of millions of illegals here, and they're inviting hundreds of thousands more who are rushing our border, creating, as we said they would, a humanitarian crisis at the border and soon in the border communities.”

Cuccinelli said we are beginning to witness the "Biden effect" at the Southwest Border: "It's an explosion of crossings while tying the hands of officers from dealing with it."