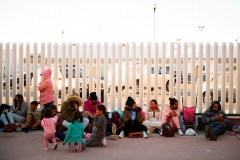 (Updates with Psaki's comments to MSNBC on Tuesday morning.)

So now we're in this tough spot where we need to be able to find facilities, shelters where these kids can have access to educational resources, to lawyers, to doctors. And we are also in a circumstances where we're dealing with COVID. So a lot of facilities have smaller capacity. So that's the challenge and that's what we're confronting.

As you saw, this weekend, the president asked a number of the senior policy officials who are running points on this very tough issue to go visit one of the shelters in Carrizo Springs in Texas and visit a Border Patrol station.

What we are trying to do, Mika, is move kids as quickly as possible thru the Border Patrol facilities into shelters so that they can gain access to all those resources I said, and then quickly move them into sponsor homes or connect them with family members. That's our objective. And that's what the policy process is working through right now.

Psaki said the Biden policy differs from Trump policy in that "we're not ripping children from the arms of their parents.”

That's exactly what the Trump administration did. And we don't think that 's a moral step. We also are not sending kids back on a treacherous trip that is dangerous and many have lost their lives. So that's another big difference.

We are, though, Mika, what people should be aware of, there is -- during the Trump administration, sometimes there was a jump to connect kids to individuals, to adults who claimed that they were family members or claimed they knew them. And there were issues of child trafficking. We need to prevent that, too. So we need to take the time to vet the individuals who these kids are being connected with. We're trying to figure out how to expedite that process.

I've been in many meetings with the president where he asks how can this be faster, how many teachers do they have access to, do we have enough health and medical experts? Those are the conversations that are happening internally.

The challenges -- there are a lot of really difficult choices. We're trying to chart the best path forward. But there's no question this is a heartbreaking circumstance at the border.

On Monday, Psaki said the administration needs to work harder to spread the message that "now is not the time to come" to the U.S. border, even as thousands of foreigners, many of them children, flow into this country.

"I would say it's clear we need to work more on--on getting the message out and being very clear, now is not the time to come. There is -- the majority of people who come to the border are turned away," Psaki told reporters on Monday.

"Yes, we are--we have changed the policies of the last administration as it relates to unaccompanied children, but the majority of families, adults -- the vast, vast majority -- are turned away at the border, and that is a message that clearly we need to continue to look for means and ways of getting out, you know, more and more out to the region."

Joining Psaki at the news conference was Julissa Reynoso, the chief of staff to the first lady, who was part of a delegation sent to witness conditions on the Southwest Border this past weekend.

We were asked by the president to take a trip to evaluate and understand the situation on the ground," Reynoso said:

As you all know, we inherited a broken system, and we have--there are many challenges involved currently. We did speak to many of the folks involved, including children.

So it is -- we're trying to manage this in an orderly fashion, but obviously being very mindful of the human cost here in light of the fact that we do -- we are talking about kids. So that is something we are--we are managing, and we do plan to brief the president this week on it. We have not done so yet.

So we'll -- we'll -- you'll hopefully learn more during the course of the week, but our first order of business is to really have that conversation with the president.

Given reports about the many thousands of children coming into the United States, a reporter asked Psaki if there is a need for more shelters to hold them:

Well, we know just purely by the number, Steve, that there is going to be a need, right, because we have a large number of kids, unaccompanied children who are coming across the border. We've made a policy decision as an administration that the humane and moral approach is to keep these kids safe and get them into facilities that are safe.

There are some limitations, which I know many of you are familiar with, because of COVID restrictions and protocols that reduce the capacity at a number of these sites. CDC also put out some guidelines.

You -- many of you may have seen, I believe it was on Thursday or Friday -- that will allow for increased capacity at some of the sites. But it is an area -- it is an area of policy discussion, how will we continue to accommodate in a safe and humane way these kids.

And our objective remains moving them as quickly as possible out of the Border Patrol facilities. In order to do that, we need to have shelter facilities that are safe, that have access to educational resources, legal resources, health and medical resources, and we need to ensure we have capacity to do that.

Psaki also said the Biden administration is "committed to allowing cameras" into the shelters where foreign children are being held in the United States.

"We need to do that in a way that is -- protects the privacy of these kids, who are under 18, is safe given COVID protocols, and we are committed to doing that," Psaki said.

No reporters or cameras were allowed to accompany the Biden delegation on their recent visit to a Border Patrol facility and the Carrizo Springs shelter in Texas.