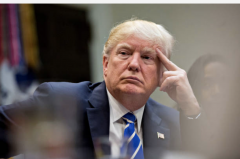 The participation rate has now dropped 2.5 percentage points since March, and it is the lowest it has been since the 60.0 percent recorded in January 1973.

As expected, because of government-mandated business closings, there was more bad news:

A record 103,415,000 Americans, roughly one-third of the population, were counted as "not in the labor force" in April, a gain of 6,570,000 in just one month. The previous record high for this number, swelled in part by retiring baby boomers, was 96,845,000 in March. (The labor force is made up of the employed and the unemployed. The remainder, those who have no job and are not looking for one, are counted as not in the labor force.)

The number of employed Americans had broken 25 records under President Trump, something he has frequently repeated on the campaign trail.

Consequently, the unemployment rate reached a whopping 14.7 percent last month, the highest rate and the largest month-to-month increase (+10.3 points) in the history of the BLS series, which includes  seasonally adjusted data available back to January 1948.

Until March, the nation's unemployment rate had been either 3.5 percent or 3.6 percent -- a 50-year low -- for the past six months.

In April, the civilian non-institutional population in the United States was 259,896,000. That included all people 16 and older who did not live in an institution (such as a prison, nursing home or long-term care facility).

Of that civilian non-institutional population, 156,481,000 were participating in the labor force, meaning that they either had a job or were actively seeking one during the last month. This resulted in a labor force participation rate of 60.2 percent, down from the Trump-era high of 63.4 percent set this past January and February.

The participation rate was 62.8 percent when Trump took office, and it had showed little change, until now, as retiring baby boomers offset additions to the nation's workforce.

As the Bureau of Labor Statistics says, the participation rate is an important labor market measure because it represents the relative amount of labor resources available for the production of goods and services. Also, people who participate in the labor force (and pay taxes) help support those who don't.

Total nonfarm payroll employment fell by 20.5 million in April, after declining by 870,000 in March. The April month-to-month jobs decline is the largest in the history of the series and brought employment to its lowest level since February 2011 (this series dates back to 1939).

Job losses in April were widespread, with the largest employment decline occurring in leisure and hospitality, followed by education and health services.

“Even the Democrats aren't blaming me for that, but what I can do is I'll bring it back,” Trump promised.

But I created, as president, we had the strongest economy in the history of the world, the strongest economy we've ever had, and we had to close it, which is artificial. We artificially closed it. Those jobs will all be back, and they'll be back very soon, and next year we're going to have a phenomenal year. People are ready to go. We've got to get it open. People are ready to go.”

Also See:
Labor Secretary: States Should Be 'Mindful' of People Who Refuse Offers to Return to Work