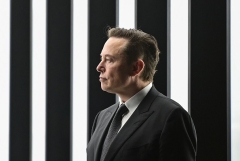 Tesla CEO Elon Musk has launched a hostile takeover bid for Twitter for the sake of free speech and "civilization" itself, he said. (Photo by PATRICK PLEUL/POOL/AFP via Getty Images)

(CNSNews.com) - The possibility that Twitter might become a true free-speech zone sent panic through liberal enclaves on Thursday, after billionaire Elon Musk offered to buy the company for $54.20 a share.

"I think it's very important for there to be an inclusive arena for free speech," Musk said, insisting that his cash offer was his best and last offer.

Many conservatives are rooting for Musk, including Rep. Jim Jordan (R-Ohio) who told Fox News's Sean Hannity, "The first amendment is not a threat to democracy, it's what preserves democracy." Jordan said he hopes Musk's takeover bid will succeed, but he also doubts it will:

"The left's position is, if you don't agree with me, you're not allowed to speak, and if you try, we are going to call you racist and we're going to try to cancel you.

"They can't do all the things that they want to do and they've been doing, so I don't think they'll let it go forward. I hope they do. I hope it's a victory for free speech."

Jordan said the leftists are so committed to censorship and undermining the Constitution that they won't stand for anything that gets in their way.

Even Musk has expressed doubt about whether his offer will be accepted.

Saudi Prince Al Waleed bin Talal Al Saud, one of Twitter's largest shareholders, rejected Musk's bid, tweeting: "I don't believe that the proposed offer by @elonmusk ($54.20) comes close to the intrinsic value of @Twitter given its growth prospects. Being one of the largest & long-term shareholders of Twitter, @Kingdom_KHC & I reject this offer."

Musk replied to the Saudi prince, tweeting: "Interesting. Just two questions, if I may. How much of Twitter does the Kingdom own, directly & indirectly? What are the Kingdom’s views on journalistic freedom of speech?"

As Musk indicated, freedom of speech does not flourish in the kingdom.

Hannity asked Jordan what Congress might be able to do about censorship if the Saudi prince is able to block the Twitter sale:

"Look, we've got to take away their liability protection at a minimum. We've got to pass that. I don't think Joe Biden will sign it," Jordan said.

"We've got to look at speeding up any type of antitrust action in the court system. We've got to have more transparency when they do censor you, throttle you back, we need to know that when it's happening.

"And we may need, frankly, look at a private cause of action if they're going to take people down and do things like they did to President Trump and others, so all that needs to happen...The First Amendment is not a threat to democracy, it's what preserves democracy, and they are directly going at it."

Jordan noted that for Twitter shareholders, "politics" may be more important than making money. "I think that's a big issue here as well, so let's see how this plays out. And I hope it's successful, because we need all the forums we can have that are devoted to the public square being a place where the First Amendment is protected."