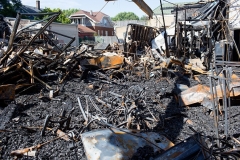 The rubble of burned stores is seen in the black Uptown neighborhood of Kenosha, Wisconsin on September 2, 2020, a week after the rioting. (Photo by Andrew Lichtenstein/Corbis via Getty Images)

(CNSNews.com) - Rep. Karen Bass (D-Calif.), now a candidate for Los Angeles mayor, told CNN on Sunday that the Kyle Rittenhouse trial is "based in race," even though Rittenhouse is white and so are the three men he shot during the August 2020 riots in Kenosha.

Two of the men died. Rittenhouse is claiming self-defense, and closing arguments begin today in his trial.

"Explain how you think there's a racial dimension to this case," Jake Tapper, host of CNN's "State of the Union" asked Bass:

"Well, because remember, now, where were those white men that were killed? They were at a protest, protesting in solidarity for black folks," Bass said:

So, to me, it was reminiscent of the civil rights movement when you had young white people that participated in the sit-ins and the protests, and they were subject to beatings. They were subject to shootings. Many of them were killed as well.

And it's as though the judge is taking that very lightly. Remember, the judge in Rittenhouse case said you couldn't even refer to the people that were killed as victims. You could refer to them as rioters.

Here, you have a 17-year-old boy who was driven by his mother across state lines with an automatic weapon -- frankly, she should have been detained for child endangerment -- to go to a protest where he says he's going to help the police? I mean, it was ridiculous.

He walks across with his automatic weapon, and the police just look at him. And the majority of the people that were protesting were African-American, but the white men that were killed were protesting in solidarity with the black people. So it reminded me of the civil rights movement.

Dozens of Kenosha businesses, including some black-owned businesses, were destroyed in the rioting that spread over several nights.

The trouble in Kenosha was prompted by a white police officer shooting a black man, Jacob Blake, while police were responding to a domestic disturbance call. Blake survived his injuries, but he is paralyzed from the waist down.

This past October, the U.S. Justice Department announced that it would not pursue federal criminal civil rights charges against the Kenosha police officer "because the evidence obtained is insufficient to prove that the KPD officer willfully used excessive force."