Rep. Katko: 'Every State and Every City Is a Border State and City Now' 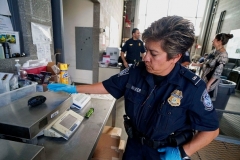 An Immigration and Customs Enforcement agent weighs a package of fentanyl confiscated at the San Ysidro Port of Entry in California. (Photo by SANDY HUFFAKER/AFP via Getty Images)

(CNSNews.com) - "In my district last week, we had 14 overdose deaths in one night just in the city of Syracuse," Rep. John Katko (R-N.Y.) told "Sunday Morning Futures."

Katko, the ranking Republican on the House Homeland Security Committee, blamed President Joe Biden's open southwest border for the nation's escalating drug problem. He said the drug cartels are enriching themselves, and at the same time, exerting control over drug networks across the United States:

"And what people don't understand -- in Upstate New York, for example, the border is thousands of miles away. It may be thousands of miles away, but, really, every state and every city is a border state and city now, because of what's happening with these drugs coming into our country, and the illegal aliens coming in that are -- that are involved in criminal conduct as well."

Katko, a former prosecutor of organized crime, including drug cartels, said those cartels control the illegal drug market by collecting on debts owed to them:

"You cannot cross the border without paying them to come in, and the human trafficking standpoint -- $4,000 is a minimum, and oftentimes much more. Many of these people coming across can't afford to pay it. So they are told by the cartels where to go and who to appear to, to work off their debt.

"So, in fact, we are strengthening the cartels' grip on drugs and drug distribution networks in this country by having these people come across who have to pay off their debts to the cartels. It's crazy," he said.

Katko noted that around 100,000 people have died from drug overdoses this year. "The vast majority of them had been laced with fentanyl. And they have seized enough fentanyl at the border in the last year to kill every man, woman and child in the United States seven times over.

Think about that. And given the fact that we have seized that much, I know, for a fact that, when you're seizing that much, that much more is getting through. So, it's a crisis that this administration has created. And he's not doing anything about it," Katko said, referring to President Biden -- who has never been to the southwest border.

"And one thing the cartels know, when the border is secure, it's much more difficult to get -- for them to get the drugs across. When it's not secure, it's a piece of cake for them. And that's what we're seeing now."