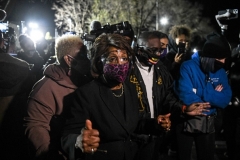 Rep. Maxine Waters (D-Calif.) speaks to the media during an ongoing protest at the Brooklyn Center Police Department in Brooklyn Center, Minnesota on April 17, 2021. (Photo by CHANDAN KHANNA/AFP via Getty Images)

(CNSNews.com) - "Maxine Waters is inciting violence in Minneapolis — just as she has incited it in the past," House Minority Leader Kevin McCarthy (R-Calif.) tweeted on Sunday. "If Speaker Pelosi doesn’t act against this dangerous rhetoric, I will bring action this week," McCarthy promised.

Waters, a California Democrat, told protesters in Brooklyn Center, Minneapolis on Saturday that if a guilty verdict is not returned against the police officer accused of killing George Floyd, "We've got to stay on the street, and we’ve got to get more active, we’ve got to get more confrontational. We’ve got to make sure that they know that we mean business."

In remarks leading up to that, the 82-year-old Waters -- wearing a mask and a face shield -- told the crowd:

This is a very difficult time in the history of this country, despite the fact that we know that our people of color have been killed too often, unarmed young men, in particular black men, have been killed. We know that we are now coming to the end of the George Floyd trial and that I suppose the closing arguments are going to be made on that case coming Monday.

And we're really just almost at the beginning of what is happening with our young man, Daunte Wright, who was killed, and that we have to persist in calling for justice. We have to let people know that we're not going to be satisfied unless we get justice in these cases.

Waters said she's unhappy that it's taken so long for the House to pass a police reform bill, which is now pending in the Senate, where "the right wing, the racists, are opposed to it, and I don't know what's going to happen to it. But I know this, we've got to stay in the street and we've got to demand justice," she said.

Rep. Maxine Waters showed up at the protest tonight in Brooklyn Center, telling people "we've got to get more confrontational" and suggesting they should ignore the curfew. pic.twitter.com/4FcfhIoaJf

Waters said she's looking for a guilty verdict in the trial of Minneapolis Police officer Derek Chauvin: And if that doesn't happen, "then we know that we've got to not only stay in the street, but we've got to fight for justice. But I am very hopeful, and I hope that we are going to get a verdict that says guilty, guilty, guilty. And if we don't, we cannot go away."

In June 2018, after President Trump's spokeswoman Sarah Huckabee Sanders was asked to leave a Virginia restaurant because of her affiliation with Trump, Waters told a crowd on Capitol Hill there should be more of that going on:

"If you see anybody from that (Trump) Cabinet in a restaurant, in a department store, at a gasoline station, you get out and you create a crowd. You push back on them. Tell them they’re not welcome anymore, anywhere!" Waters said.

At the time, House Minority Leader Nancy Pelosi (D-Calif.) excused Waters' comments by blaming Trump. "Trump's daily lack of civility has provoked responses that are predictable but unacceptable," Pelosi said. "As we go forward, we must conduct elections in a way that achieves unity from sea to shining sea."