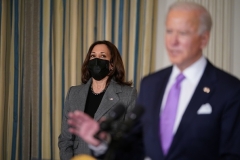 (CNSNews.com) - It's no accident that Democrat Governors Gavin Newsom and Andrew Cuomo are under fire, even from Democrats, Rep. Devin Nunes (R-Calif.) told "Sunday Morning Futures" with Maria Bartiromo.

They need to be eliminated as competitors for president-in-waiting Kamala Harris, Nunes said:

Well, I think it's real easy. The Democratic Party is really a socialist party with a politburo system. It's how it runs out in California.

And I have said this on your show before. Kamala Harris never really had to run for anything. And when she did run from something, she couldn't even get 1 percent in the Democratic primary. She had to drop out after blowing through $100 million.

They're a threat to Harris, as -- because, before -- all this stuff about Cuomo was known for a long time. This isn't new information…So, this is all about eliminating -- eliminating the opposition. Eliminate the opposition, so that she has a free run in 2024 and isn't challenged by one -- prominent governors from two of the biggest states, New York or California.

The petition reads in part:

Governor Newsom has implemented laws which are detrimental to the citizens of this state and our way of life. Laws he endorsed favor foreign nationals, in our country illegally, over that of our own citizens. People in this state suffer the highest taxes in the nation, the highest homelessness rates, and the lowest quality of life as a result. He has imposed sanctuary state status and fails to enforce immigration laws. He unilaterally over-ruled the will of the people regarding the death penalty. He seeks to impose additional burdens on our state by the following: removing the protections of Proposition 13, rationing our water use, increasing taxes and restricting parental rights….

The opposition to New York Gov. Cuomo stems from his handling of the COVID pandemic, specifically his decision to send hospitalized COVID-positive patients back to nursing homes, then allegedly covering up data about the number of deaths in those nursing homes.

In response, Cuomo issued a statement on Sunday that reads in part:

At work sometimes I think I am being playful and make jokes that I think are funny. I do, on occasion, tease people in what I think is a good natured way. I do it in public and in private. You have seen me do it at briefings hundreds of times. I have teased people about their personal lives, their relationships, about getting married or not getting married. I mean no offense and only attempt to add some levity and banter to what is a very serious business.

I now understand that my interactions may have been insensitive or too personal and that some of my comments, given my position, made others feel in ways I never intended. I acknowledge some of the things I have said have been misinterpreted as an unwanted flirtation. To the extent anyone felt that way, I am truly sorry about that.