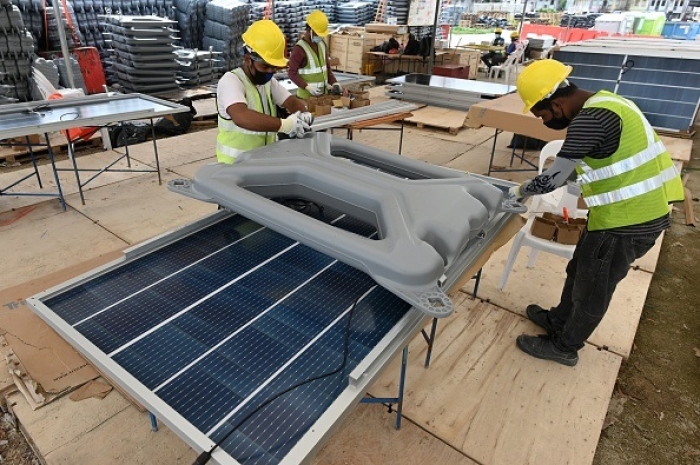 This photograph taken on February 3, 2021 shows workers affixing a floater onto a solar panel as part of the construction of a floating solar power farm on Tengeh reservoir in Singapore. (Photo by ROSLAN RAHMAN/AFP via Getty Images)

(CNSNews.com) - As President Biden once again invoked the Defense Production Act on Monday -- this time "to accelerate domestic production of clean energy technologies" -- some Republicans are pushing back.

Invoking the Defense Production Act -- which is intended for use in national emergencies only -- allows Biden to lift duties on the importation of solar cells and modules from Southeast Asia -- "to avoid disruptions to the electric power system," as the Commerce Department described it.

"Once again, @POTUS is abusing the Defense Production Act—this time to advance his global warming agenda by using taxpayer dollars to build solar panels," Sen. Pat Toomey (R-Pa.) tweeted. "If the administration keeps misusing the DPA for non-defense purposes, Congress must curtail it."

Sen. Tom Cotton (R-Ark.) told Fox News on Monday he's "not sure what the emergency is here."

"But more fundamentally, Bret, when gas is approaching $5-a-gallon on average across the country -- $7 and $8 in some states -- the fact that Biden White House is focused on solar energy as opposed to getting gas price under control really tells you where their priorities are."

Cotton said bringing gas prices down is not a priority for Biden or "Democratic politicians."

"This is exactly what Joe Biden said in the campaign. That we are going to phase out energy sources like oil and gas and coal. So, for Democrats who have this green new deal fantasies, $5 a gallon gas is not an accident, it's not an unintended consequence. It's very much the intended consequence.

The Defense Production Act is the primary source of presidential authorities to "expedite and expand the supply of materials and services from the U.S. industrial base needed to promote the national defense," according to the Federal Emergency Management Agency.

"First, the President — you know, when he takes the Defense Production Act, it’s to make sure that he’s delivering for the American people.  It is an important tool that he has used a couple of times, and it has been incredibly effective.

"And he is providing U.S. solar deployers the short-term stability they need to build clean energy projects and deliver more affordability energy to American families and business.

"Altogether, these historic actions will cut costs for American families, strengthen our power grid, and tackle the climate crisis.  And with a stronger clean energy arsenal, the United States can be an even stronger partner to our allies, especially in the face of Putin’s war in Ukraine."

The reporter followed up: "But what’s the emergency in the solar industry?"

"Well, this is just a step to get to — to a place where we do have a clean energy arsenal," Jean-Pierre said.

Later, Jean-Pierre offered a more tailored response to the "what's the emergency" question:

"Yeah, so the President is invoking an authority under the Tariff Act that authorizes him to suspend certain important duties to address an emergency.  In this case, the emergency is the threat to the availability of sufficient electricity-generation capacity to meet expected customer demand.  So that’s the emergency there.

"The President’s action will help ensure that we have the solar capacity additions necessary to meet our electricity and generate — and generation needs. So, the President is invoking section three- — 318(a) of the Tariff Act, and that’s how we’re moving forward."

Another reporter asked the spokeswoman, "How is this not a gift to Chinese solar manufacturers who — many of whom operate with forced labor and are subsidized by the Chinese Communist Party?"

"So, you know, today’s announcement is about one country and one country alone, and it’s about the United States," Jean-Pierre responded:

"It is about the reliability of our power — of our power grid.  It is about reducing costs for American families, and it’s about enabling domestic solar manufacturers to move forward with their projects.

"The actions that we’re — we are currently doing is being applauded by members of Congress, by labor, by climate groups, by U.S. CEOs, and domestic solar manufacturers as well.

"The — the actions do not apply to any materials imported from China.  Import duties will remain in place on solar cells and panels from China or Taiwan.  So it has nothing to do with either; it’s about making sure that we’re delivering for the American public."