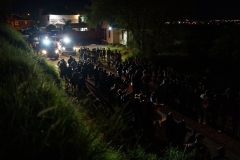 Border Patrol agents process migrants who crossed into the United States in Roma, Texas on July 9, 2021. (Photo by PAUL RATJE/AFP via Getty Images)

(CNSNews.com) - In a July 14 letter to President Joe Biden, 26 Republican senators urged him not to lift the Title 42 order that allows the immediate expulsion of many illegal aliens for public health reasons.

In March 2020, as the pandemic took hold, the Centers for Disease Control and Prevention under President Donald Trump barred the entry of certain illegal aliens under Title 42 until the "serious danger" of COVID-19 has ceased.

Now is not the time to encourage even more illegal immigration, the senators said, with the delta variant spreading and with the Biden administration warning daily that COVID is surging among unvaccinated people in this country.

“The COVID-19 pandemic is the most significant public health crisis the United States has faced in our lifetime," the 26 Republican senators wrote to Biden.

"Recent reports indicate the administration is considering immediately terminating the public health authority granted to immigration officials under Sections 362 and 365 of the Public Health Service (PHS) Act, 42 U.S.C. §§ 265, 268. Ending this order will have a dire impact on the crisis already engulfing our southwestern border. We urge you in the strongest possible terms not to take this action."

The CDC order allows the immediate expulsion of aliens who would otherwise be held in group settings at Border Patrol stations and ports of entry.

“COVID-19 is a highly transmissible virus, and limiting the number of individuals held in close proximity is a completely justified measure while the threat of COVID-19 persists. This is why federal immigration officials continue making robust use of the Title 42 authority," the senators wrote.

The senators warned that immigration facilities already are overwhelmed:

Revoking the authority of officials to rapidly expel illegal migrants under Title 42 without a clear plan in place to handle the stress this population will place on the system and on border communities will further exacerbate the crisis at the southwestern border.

Furthermore, your administration continues warning the American public about the dangers posed by the variants of COVID-19. Recently, CDC Director Dr. Rochelle Walensky, made clear, “This rapid rise is troubling.” She went on to state that, “The delta variant is surging in pockets of the country.”

The Department of State also recently issued an advisory regarding travel to Mexico—the country through which the vast majority of migrants affected by the CDC Order pass—stating, “Do not travel to Mexico due to COVID-19.” If the CDC and the State Department believe that the threat of COVID-19 is actually increasing (and specifically in Mexico), it is contradictory for the Biden Administration to simultaneously revoke the public health authority used by immigration officials to slow the spread of COVID-19.

The administration’s first priority must be to protect the American homeland. Allowing political considerations to overrule the clear public health threat created by the spread of COVID-19 at the border is reckless and irresponsible.

In a Friday (right before the weekend) announcement, U.S. Customs and Border Protection said it encountered 188,829 illegal border crossers in June alone, a five percent increase over May 2021 and the largest monthly number in 20 years.

"CBP continues to expel single adults and family units that are encountered pursuant to CDC guidance under Title 42 authority. The majority of all June encounters resulted in a Title 42 expulsion," CBP said.

(Side note: Since the start of the pandemic, more than 8,900 CBP employees have tested positive for COVID-19, and 33 have passed away, CBP said on Friday.)

According to a recent (July 6) Politico article:

The White House is expected to reopen the U.S.-Mexico border in the coming weeks, and even President Joe Biden’s allies are worried he’s not ready for the logistical and political impact, including an avalanche of Republican attacks that will follow.

In a series of phases, the Biden administration is expected to lift the public health authority, Title 42, invoked by former President Donald Trump at the start of the pandemic. Trump cited the risk of spreading coronavirus to argue that the government needed to quickly kick out migrants arriving at the border without allowing them to seek asylum. The phased-in approach means Biden could first end the practice of turning away families and then, later this summer, for single adults, according to people familiar with the discussions.