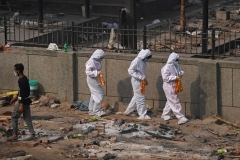 Relatives wearing personal protective equipment hold garlands as they walk towards the funeral pyre of a loved one who died of COVID at a cremation ground in New Delhi on May 2, 2021. (Photo by TAUSEEF MUSTAFA/AFP via Getty Images)

(CNSNews.com) - "There is something morally objectionable about rich countries being able to get that vaccine, and yet millions and billions of people in poor countries are unable to afford it," Sen. Bernie Sanders told NBC's "Meet the Press" on Sunday.

Host Chuck Todd asked Sanders if the United States should be "more aggressive" in sharing vaccines with places such as India, where the pandemic is out of control.

"The answer is yes," Sanders said:

I think we've got to obviously make sure that every American gets vaccinated as quickly as possible. But I do think, not only do we have a moral responsibility to help the rest of the world, it's in our own self-interest, because if this pandemic continues to spread in other countries, it's going to come back and bite us at one point or another.

The second thing we should do is not only make sure excess vaccines in the United States get around the countries that need it, we should deal with the issue of the World Trade Organization -- of protecting the intellectual property rights of the drug companies.

I think what we've got to say right now to the drug companies, when millions of lives are at stake around the world, yes, allow other countries to have these intellectual property rights so that they can produce the vaccines that are desperately needed in poor countries.

There is something morally objectionable about rich countries being able to get that vaccine, and yet millions and billions of people in poor countries are unable to afford it.

Likewise, National Security Advisor Jake Sullivan told ABC's "This Week" on Sunday that the Biden administration is concerned about the dire situation in India: "We believe that the pharmaceutical companies should be supplying at-scale and at-cost to the entire world so that there is no barrier to everyone getting vaccinated."

Sullivan said the U.S. trade representative "is engaged in intensive consultations at the WTO to work through this issue. And we should have a way forward in the coming days."

Sen. Bernie Sanders is a longtime critic of the pharmaceutical industry.

In another tweet on the same day, he wrote: "The American people should not be made to pay the highest prices on the planet for prescription drugs."