SCOTUS, 6-3: Illegal to Fire Someone ‘Merely for Being Gay or Transgender’ 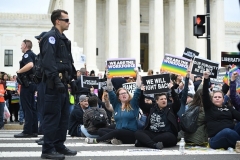 LGBT activists rally outside the US Supreme Court on October 8, 2019, as the Court holds oral arguments in three cases dealing with workplace discrimination based on sexual orientation. (Photo by SAUL LOEB/AFP via Getty Images)

(CNSNews.com) - In a 6-3 ruling issued on Monday, the U.S. Supreme Court said an employer who fires an individual merely for being gay or transgender violates Title VII of the 1964 Civil Rights Act.

"In each of these cases," Justice Neil Gorsuch wrote for the majority, "an employer allegedly fired a long-time employee simply for being homosexual or transgender. Clayton County, Georgia, fired Gerald Bostock for conduct 'unbecoming' a county employee shortly after he began participating in a gay recreational softball league.

"Altitude Express fired Donald Zarda days after he mentioned being gay. And R. G. & G. R. Harris Funeral Homes fired Aimee Stephens, who presented as a male when she was hired, after she informed her employer that she planned to 'live and work full-time as a woman.'

"Each employee sued, alleging sex discrimination under Title VII," which makes it “unlawful...for an employer to fail or refuse to hire or to discharge any individual, or otherwise to discriminate against any individual...because of such individual’s race, color, religion, sex, or national origin.”

According to the Gorsuch opinion:

Consider, for example, an employer with two employees, both of whom are attracted to men.  The two individuals are, to the employer’s mind, materially identical in all respects, except that one is a man and the other a woman.  If the employer fires the male employee for no reason other than the fact he is attracted to men, the employer discriminates against him for traits or actions it tolerates in his female colleague.

The court found that "homosexuality and transgender status are inextricably bound up with sex.

"Not because homosexuality or transgender status are related to sex in some vague sense or because discrimination on these bases has some disparate impact on one sex or another, but because to discriminate on these grounds requires an employer to intentionally treat individual employees differently because of their sex."

Justice Samuel Alito, in his dissenting opinion -- joined by Justice Thomas (Justice Kavanaugh wrote his own dissent) -- wrote that "'sex' still means what it has always meant."

And in any event, our duty is to interpret statutory terms to “mean what they conveyed to reasonable people at the time they were written.”

The Court attempts to pass off its decision as the inevitable product of the textualist school of statutory interpretation championed by our late colleague Justice Scalia, but no one should be fooled.  The Court’s opinion is like a pirate ship.  It sails under a textualist flag, but what  it actually represents is a theory of statutory interpretation that Justice Scalia excoriated––the  theory  that courts should  “update” old statutes so that they better reflect the current values of society.

"Allowing judges to rewrite the Civil Rights Act to add gender identity and sexual orientation as protected classes poses a grave threat to religious liberty. We've already witnessed in recent years how courts have used the redefinition of words as a battering ram to crush faith-based businesses and organizations."

The Alliance Defending Freedom also warned: "Redefining ‘sex’ to mean ‘gender identity’ will create chaos and enormous unfairness for women and girls in athletics, women’s shelters, and many other contexts.

"Civil rights laws that use the word ‘sex’ were put in place to protect equal opportunities for women. Allowing a court or government bureaucrats to redefine a term with such a clear and important meaning undermines those very opportunities—the ones the law was designed to protect.”