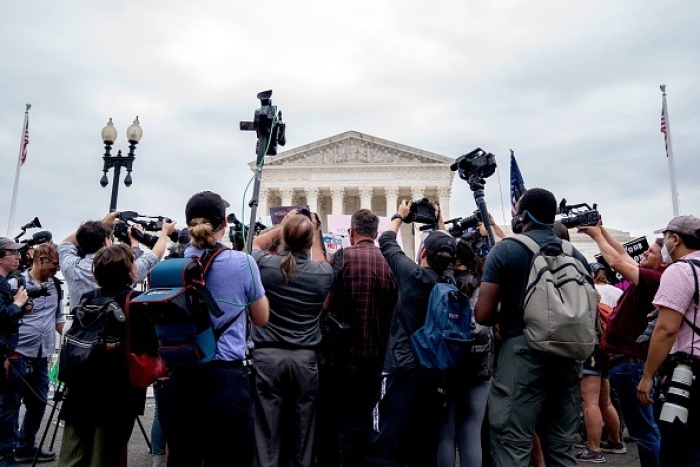 Crowds grow outside the U.S. Supreme Court as the big end-of-term opinions are handed down. (Photo by STEFANI REYNOLDS/AFP via Getty Images)

(CNSNews.com) - In a 6-3 opinion written by Justice Clarence Thomas, the Supreme Court ruled that New York "violated the Fourteenth Amendment by preventing law-abiding citizens with ordinary self-defense needs from exercising their Second Amendment right to keep and bear arms in public for self-defense."

According to the syllabus: "The State of New York makes it a crime to possess a firearm without a license, whether inside or outside the home. An individual who wants to carry a firearm outside his home may obtain an unrestricted license to 'have and carry' a concealed 'pistol or revolver' if he can prove that 'proper cause exists' for doing so."

The ruling notes that "[n]o New York statute defines 'proper cause.' But New York courts have held that an applicant shows proper cause only if he can 'demonstrate a special need for self-protection distinguishable from that of the general community.'”

The two petitioners, described as adult, law-abiding New Yorkers, both applied for unrestricted licenses to carry pistols in public based on their "generalized interest in self-defense."

The state refused their request, saying the two men failed to satisfy the "proper cause" requirement.

According to the opinion:

"The constitutional right to bear arms in public for self-defense is not 'a second-class right, subject to an entirely different body of rules than the other Bill of Rights guarantees.'

"The exercise of other constitutional rights does not require individuals to demonstrate to government officers some special need. The Second Amendment right to carry arms in public for self-defense is no different.

"[T]he real thrust of today’s dissent is that guns are bad and that States and local jurisdictions should be free to restrict them essentially as they see fit.”

"That argument was rejected in Heller...Heller correctly recognized that the Second Amendment codifies the right of ordinary law-abiding Americans to protect themselves from lethal violence by possessing and, if necessary, using a gun.

"In 1791, when the Second Amendment was adopted, there were no police departments, and many families lived alone on isolated farms or on the frontiers. If these people were attacked, they were on their own.

"It is hard to imagine the furor that would have erupted if the Federal Government and the States had tried to take away the guns that these people needed for protection.

“Today, unfortunately, many Americans have good reason to fear that they will be victimized if they are unable to protect themselves. And today, no less than in 1791, the Second Amendment guarantees their right to do so."

Justice Brett Kavanaugh, recently threatened by a man carrying a gun, also wrote a concurring opinion to emphasize the point that "the Court’s decision does not prohibit States from imposing licensing requirements for carrying a handgun for self-defense.

"In particular, the Court’s decision does not affect the existing licensing regimes -- known as 'shall-issue' regimes -- that are employed in 43 States.

"The Court’s decision addresses only the unusual discretionary licensing regimes, known as 'may-issue' regimes, that are employed by 6 States including New York.

As the Court explains, New York’s outlier may-issue regime is constitutionally problematic because it grants open-ended discretion to licensing officials and authorizes licenses only for those applicants who can show some special need apart from self-defense.

“Those features of New York’s regime -- the unchanneled discretion for licensing officials and the special-need requirement -- in effect deny the right to carry handguns for self-defense to many 'ordinary, law-abiding citizens.'"

In his dissent, Justice Stephen Breyer mentioned mass shootings and other "examples of the dangers that firearms pose."

"There is, of course, another side to the story. I am not simply saying that “guns are bad.” Some Americans use guns for legitimate purposes, such as sport (e.g., hunting or target shooting), certain types of employment (e.g., as a private security guard), or self-defense.

"Balancing these lawful uses against the dangers of firearms is primarily the responsibility of elected bodies, such as legislatures.

“It requires consideration of facts, statistics, expert opinions, predictive judgments, relevant values, and a host of other circumstances, which together make decisions about how, when, and where to regulate guns more appropriately legislative work. That consideration counsels modesty and restraint on the part of judges when they interpret and apply the Second Amendment.”

Breyer said the various states may come to differing views on the degree of risk posed by firearms:

"The question presented in this case concerns the extent to which the Second Amendment restricts different States (and the Federal Government) from working out solutions to these problems through democratic processes.

“The primary difference between the Court’s view and mine is that I believe the Amendment allows States to take account of the serious problems posed by gun violence that I have just described. I fear that the Court’s interpretation ignores these significant dangers and leaves States without the ability to address them."