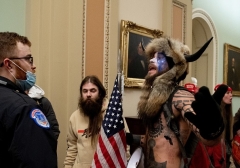 Supporters of President Donald Trump confront a US Capitol Police officer on January 6, 2021. (Photo by SAUL LOEB/AFP via Getty Images)

(CNSNews.com) - Marking the six-month anniversary on Tuesday of the attack on the U.S. Capitol, the U.S. Capitol Police announced steps it is taking to "support our officers, enhance security, and pivot towards an intelligence-based protective agency."

As part of its "protective" mission, the agency announced it is in the process of opening regional field offices in San Francisco, California and Tampa, Florida to investigate threats to Members of Congress. It said field offices in other regions are anticipated but did not specify where.

"I mean, first, let me say, I have the deepest admiration and gratitude for the frontline Capitol police officers, who keep us safe every single day," Cotton said:

The Capitol Police, though, are there to protect the Capitol. They do work with us in our home states. And I can tell you that the Capitol Police have always had a productive and cooperative and professional relationship with their federal counterparts here in Arkansas -- FBI, Secret Service, U.S. Marshals, and also with our local police and local sheriff's departments. Those are the police forces that are here to help us in our home states and our home districts.

The Capitol Police need to be focused on our Capitol. I think Nancy Pelosi needs to explain why these offices should be opened up. I think it is convenient, as you say, that the first one is proposed to be opened in San Francisco, given the skyrocketing crime rates there and the fact that people can just walk in the CVS or Walgreens. Maybe Nancy Pelosi should focus on the San Francisco police, and especially on her George Soros-backed prosecutor who refuses to prosecute basic shoplifting.

The New York Times quoted Tim Barber, a Capitol Police spokesman, as comparing the regional field offices to those maintained by the Secret Service. He told the newspaper that Capitol Police must be able to monitor and quickly investigate threats against lawmakers wherever they occur.

But critics on Twitter questioned the Capitol Police jurisdiction to operate beyond the Capitol.

In a statement to Fox News, Capitol Police said Florida and California "are where the majority of our potential threats are...A regional approach to investigating and prosecuting threats against Members is important, so we will be working closely with the U.S. Attorney’s Offices in those locations. More field offices will be opening in the future."

The U.S. Capitol Police Department has just launched a new recruitment effort, including the following notice on Twitter: