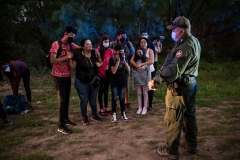 A migrant family waits to be processed after being apprehended near the border between Mexico and the United States in Del Rio, Texas on May 16, 2021. (Photo by SERGIO FLORES/AFP via Getty Images)

(CNSNews.com) - Vice President Kamala Harris "didn't have to go all the way to Guatemala and Mexico to find the root causes of this border crisis, because they're not there," Sen. Tom Cotton (R-Ark.) told Fox News's Laura Ingraham on Tuesday.

"The root causes are in the White House," Cotton said:

And that happened on January 20 when Joe Biden took office. And he essentially opened our borders, reversing very effective policies that had our borders under control.

That's true, even in the eyes of the presidents of Mexico and Guatemala, who during this trip, said that Joe Biden is largely responsible for his rhetoric on the campaign trail and during the transition, and then his policies during the administration.

That's why we've had three straight months of record high illegal immigration in our border. The highest numbers recorded in 20 years. This is not going to stop until Joe Biden recognizes the errors of his ways and begins to stop this crisis at the border.

In an interview with CBS News that aired on Sunday, Guatemalan President Alejandro Giammattei said he and Vice President Harris are "not on the same side of the coin."

Giammattei said the administration's message "changed" when Biden took office: "The message changed to, we're going the reunite families and we're going to reunite children. The very next day, the coyotes were here organizing groups of children to take them to the United States. We asked the United States government to send more of a clear message to prevent more people from leaving."

Sen. Cotton said it looks like the Biden administration doesn't really want the illegal border crossings to stop, although Harris, speaking in Guatemala on Monday, told the people, "Do not come. Do not come."

"I mean, their definition of success, going back to February and March has not been to stop the crossings, it's been to expedite the release of illegal aliens into the country," Cotton said.

"So they were worried about bed space, showers and hot meals and all the rest. That is all derivative of the fact that we have so many illegal aliens showing up at our border.

"If you turn them around in the first place, if you don't let them into the country, you don't have to worry about how many facilities you have to house them, or how you're going to put them on an airplane and put them up in a hotel until they find relatives inside the country."

Cotton said President Trump's so-called remain in Mexico policy -- scrapped by Biden -- was a "very quick fix." "Just say 'turn around, go back. You're going to remain in Mexico until we adjudicate your asylum claim.'

"We're still in the middle of a global pandemic," Cotton continued. "I know, it's gotten a lot better in United States, Laura. But all across the country, especially in -- or all across the world, especially in Latin America, it's still pretty bad. So we could use the public health authorities that have long been on the books, just close the border. That's what happened last year.

"And then finally, in Guatemala, what Kamala Harris should have been doing is trying to get a safe third country agreement back in place. So anyone who crossed through Guatemala, which is in effect, everyone who is not Mexican, would have to apply for asylum there. Because you may be seeking asylum when you leave your country, but once you leave another country, you're seeking a better job and better life."