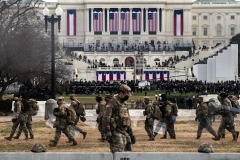 National Guard troops carry riot shields near the US Capitol at the inauguration of Joe Biden on January 20, 2021. (Photo by ROBERTO SCHMIDT/AFP via Getty Images)

(CNSNews.com) - "We don't need to turn the people's House, the center of our republic, into an armed camp," Sen. Tom Cotton said on Sunday. He said it's time to send the National Guard troops home.

Press reports quote a National Guard spokesperson as saying that up to 7,000 National Guard troops could remain in Washington, D.C., through March 12, at the request of federal officials.

Look, I'm on the Senate intelligence committee. I've consulted with Senate leadership. I'm not aware of threat reporting that suggests we need 7,000 troops and razor wire around the Capitol.

What happened January 6th was in part a failure of the senior security leaders on Capitol Hill to anticipate the kind of violence we saw from the mob that broke into the Capitol on the sixth. There was chatter about it on social media, yet they didn't request enough backup from the FBI or the Park Police and the National Guard.

Muriel Bowser, the left-wing mayor of Washington, D.C., declined to let the National Guard that was present be armed and prepared for riot equipment.

Then we had a major reaction, one might say an overreaction, of bringing 26,000 National Guard troops in for January 20th's inauguration. But the inauguration is behind us. These troops did a great job. I respect their service. They deployed on short notice.

But it's time to send home the troops. If there is threats, if the threat reporting warrants it, we can always bring troops back, but we don't need to turn the people's House, the center of our republic, into an armed camp.

Rep. Tulsi Gabbard (D-Hawaii) also criticized the plan to "keep an enduring presence" of National Guard troops in Washington for weeks to come:

"I haven't seen the justification of that," she told Fox News on Saturday.

"But again, it just reinforces my concern about what is the message they are sending to the American people by creating an enduring presence? It sounds like a lot of this stuff we've seen happen overseas."