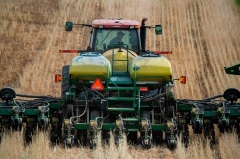 "We just introduced that legislation earlier this week. It may take some time to gain momentum, but the simple strategic facts are these,” Cotton said.

"China cannot feed its own people. The United States not only can feed our own people, we can feed much of the world. We should never surrender that massive strategic advantage. We should not allow Chinese nationals to buy up American farmland or to invest in American food and agricultural companies.

“We should protect those critical assets for our own country. I think that's something that members of both parties can get together around. I think most Americans would agree."

Cotton, citing USDA reports, says Chinese investors’ holdings of U.S. agricultural land surged from 13,720 acres in 2010 to 352,140 acres in 2020. That's slightly less than one percent of all foreign-held acres in the U.S., but China's purchases continue to increase.

Cotton says land-grabbing by foreign actors will become a greater threat in coming years. And he warns that Chinese investments in U.S. agriculture could give the communists leverage over U.S. supply chains and access to sensitive information.

Cotton told Fox News he's working with both Democrats and Republicans to explain the threat posed by China's land buys:

"In China, you don't just get to leave the country or take your money out of the country without government permission, government oversight. It's not like America. You can't just go buy a farm in Canada, you can't get a time share in Mexico.

"The people coming out of China to buy farmland and food and agricultural companies are doing so because the Chinese communists want them to. This is a national security threat. And it surrenders the massive strategic advantage that we have here in America that we are the world's bread basket while China can't feed its own people without food imports."