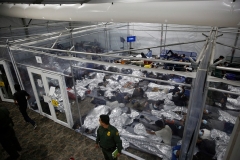 Young illegal immigrants lie inside a "pod" at the Donna, Texas holding facility, the main detention center for unaccompanied children in the Rio Grande Valley run by the US Customs and Border Protection. Photo taken on March 30, 2021. (Photo by DARIO LOPEZ-MILLS/POOL/AFP via Getty Images)

(CNSNews.com) - When Sen. John Hoeven (R-N.D.) visited the southwest border last Thursday and Friday with a group of fellow Republicans, he saw first-hand how overwhelmed the Border Patrol is, to the point where they're just releasing people, including adults, into the interior of the country.

And who are these people?

"The Border Patrol agents indicated that there are actually migrants coming here illegally from as many as 54 different countries. This isn't just Central America," Hoeven told Fox News's Neil Cavuto on Tuesday.

Nor is it just unaccompanied minors.

"We were there Thursday and Friday. At that time, it was about 3,000 migrants a day coming across the border illegally," Hoeven said.

"And if you can believe it, Neil, they were being processed under a bridge, under the Anzalduas Bridge, which is a large bridge over the Rio Grande near McAllen. They're processed in eight or nine hours. Then they're sent into McAllen. They're turned over to NGOs, and they get on a bus, and they go off into wherever in the country."

Hoeven said the Republican Senate delegation "saw hundreds and hundreds of children and mothers," not just children on their own:

And they were -- essentially, they didn't even go to the processing center. They were -- they were actually -- they go into town and, like I say, given a bus ticket, and off they go.

They are given a notice that they're supposed to appear in court. But, in many cases, that's not for three or four years. So, think about it. They're being sent into the interior of the country. They have -- they may have a contact. It may be a family member, or it may be even the cartel, because the cartels are operating in our country as well as on the border.

And then they don't even have a hearing date for three to four year, Neil. Of course, they don't come back for that. So, once they're here, and they go into the country, that's it. They're here. And that's why they're coming, because they know that's what's going on.

Hoeven said the U.S. Border Patrol is so tied up with the crush of illegal aliens coming into the Rio Grande sector, they don't have time to monitor the drug dealers and cartels operating in other sectors.

He used the CBP facility in Donna, Texas as an example: The facility was designed for 1,000 people, he said. But given the COVID social distancing protocols, the capacity should be 250 maximum. "They had 4,200 people just in that one center," Hoeven said.

And, again, a lot of these people aren't even going to the centers. They're being released into society. And, of course, now, as you have seen, the Biden administration wants to start renting hotel rooms. They are talking about spending almost $87 million to house 1,200 migrant families in hotel rooms.

So, it's gone well beyond what they can handle. And that's why we have got to go back to the policies that will work. There are solutions. We talked to the Border Patrol agents about solutions. We can go through those for a minute too.

But this can be addressed if we change the policy.

Hoeven said at a minimum, the Biden administration should reinstate President Trump's “remain in Mexico” policy, where asylum-seekers must wait on foreign soil pending the outcome of their immigration cases.

That would address the flood right now. And, remember, at the rate we're going, we're going to have way over a million in a year's time. Month of February, it was 100,000 illegal migrants. And the number is getting bigger.

So, you have got to make that kind of change and then do the other things that need to be required, the border security, making sure that you enforce the laws and those kind of things. And, ultimately, we have got to reform our immigration system.

And don't forget, this is illegal immigration, on top of more than a million people that come here legally every year.