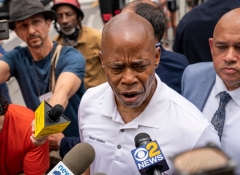 New York Mayor Eric Adams attended the vigil for a young mother gunned down on Wednesday while pushing a baby stroller. "We lost a 20 year old woman on the Upper East Side tonight," he tweeted. "More guns in our city means more lives lost..." (Photo by Robert Nickelsberg/Getty Images)

(CNSNews.com) - The execution of a young mother pushing a baby stroller on a Manhattan street this week is among the latest examples of surging crime in America's big, Democrat-run cities.

Police believe the 20-year-old woman was targeted in what's described as a domestic situation. But the shooting on Wednesday evening has further alarmed crime-weary New Yorkers.

Sen. John Kennedy (R-La.) told Fox News Wednesday night that what America's big-city mayor are doing -- or not doing -- "is not working."

"Not to be ugly, but if you asked most Americans to assess your leadership, they would say something like, don't bother to bring in the clowns, they're already here.

"Number two, in the short-term, if you want things to get better, empower your cops. Too many of our mayors think that cops are more of a problem than criminals. They are wrong. Empower your cops, pay them, hire more of them, stand behind them when they have to do their jobs. Tell them to enforce all of our laws, the big ones and the little ones. And mayors, get rid of your see-no-evil, hear-no-evil, prosecute-no-evil district attorneys.

"Point three, and this is longer-term. We have to ask ourselves why is it that these young offenders are more likely to grow up and go to prison than get married or own a home? Now, there are several reasons, but I'll give you one. Their schools suck.

"To the mayors, I would say grow some oranges and fix the schools. We need no-excuse schools, every child can learn. Find out which of our teachers can teach and pay them; find out which of our teachers can't teach and teach them how or tell them to find a new line of work. And social promotion. The new rule ought to be, I don't care how old you are, you're not getting out of the third grade until you can read.

"Expand school choice, expand vouchers -- expand vouchers, as I said. The competition will be good for public schools. And the final thing I would say Jesse -- this is to the voters, I would tell them be patient, but only up to a point. I'm going to put this down where the goats can get it. To the voters, I'd say you deserve better, demand it. Eat your vegetables, don't elect them."