Sen. Murphy: Republicans 'Have to Be Really Careful About the Things That They Say Right Now' 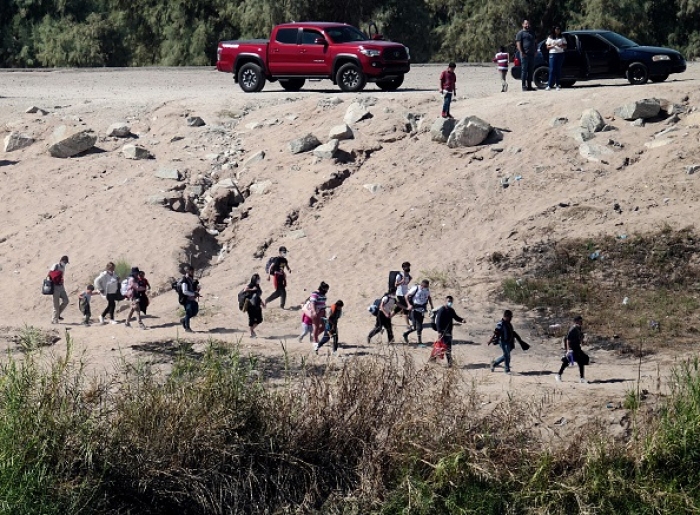 Migrants attempt to cross into the U.S. from Mexico in San Luis, Arizona. (Photo by Nick Ut/Getty Images)

(CNSNews.com) - The effort to squelch conservative speech continues in this country, as liberals and leftists try to demonize Republicans and conservatives with the "white supremacy" label, especially those who object to President Biden's wide-open border, which appears to be a political liability for Democrats.

"Replacement theory," apparently espoused by the racist Buffalo gunman in his "manifesto," is the most recent attempt to make Republicans/conservatives shut up about the rising tide of illegal immigration and the country's changing demographics.

On Tuesday, Sen. Chris Murphy (D-Conn.) said his "Republican colleagues" have to be "really careful about the things that they say right now."

"Yeah. I do think it's important for us to just take a second and talk about the very clear trend line in mass shootings in this country," Murphy responded.

"Seventy-five percent of extremist shootings in this country are committed by white supremacists," he said, apparently getting the information from The New York Times, which reported on Tuesday: "The Buffalo killings are part of a pattern: Most extremist violence in the U.S. comes from the political right."

Murphy pointed to a "through-line, from El Paso to Charleston to Buffalo, in which white supremacists who feed off of this online conversation about the replacement theory, fed by mainstream conservative and Republican institutions, are turning their anger into mass violence.

"And so this is a moment for my friends in the Republican Party, who more than occasionally endorse these hateful theories about replacement, to stop it. To stop it, to stand down. To condemn this kind of talk. To stop suggesting that Muslims or immigrants or black people or Jews are a threat to society," Murphy said.

"Because every time that they say things like that on the Senate floor, every time they go on Fox News and repeat that lie, they are unfortunately feeding this river of racist ideology into the brains of people who are contemplating mass violence. And I know that's not the intention of my Republican colleagues, but they've just got be be really careful about the things that they say right now."

(Host Joe Scarborough sneered, "Well, it may not be the intention, but they certainly know that that sort of language can lead to violence. And they do it anyway.")

According to the New York Times on Tuesday:

"Nearly half of the murders were specifically tied to white supremacists: As this data shows, the American political right has a violence problem that has no equivalent on the left. And the 10 victims in Buffalo this past weekend are now part of this toll. 'Right-wing extremist violence is our biggest threat,' Jonathan Greenblatt, the head of the ADL, has written. 'The numbers don’t lie.'”

On Sunday, The New York Times reported that "replacement theory" exists at "the extremes of American life...the notion that Western elites, sometimes manipulated by Jews, want to 'replace' and disempower white Americans."

The report said the theory "has become an engine of racist terror, helping inspire a wave of mass shootings in recent years and fueling the 2017 right-wing rally in Charlottesville, Va., that erupted in violence" [and prompted Joe Biden to run for president].

Fox News host Tucker Carlson is a frequent target of leftists who want to topple him from his prominent cable news platform for various reasons, including his blunt criticism of President Biden's immigration policies.

"So Joe Biden really has opened America's borders to the world. That is not a Republican talking point, hardly, it is completely real. And tonight, there are many more coming. Several large groups of Haitians are moving up from various countries in Latin America where they've been living to come here.

"To be perfectly clear, these are not refugees. They are not being persecuted by any government and that's why they have not applied for asylum in any of the countries between Haiti and the United States, and there are many of them. Instead these are economic migrants.

“They are rich enough for a plane ticket and a smartphone, but they're eager for the free healthcare, the education, the housing vouchers, food stamps and much more that Joe Biden has promised them if they make it to the United States.

"So, of course, they're coming from Haiti and from the rest of the world. You would, too. They'd be crazy not to come.

"Once they get here, the Biden administration plans to give them voting rights. That's in the works right now. So the people you just saw on your screen could very well be choosing your President at some point down the road.

"This is a manufactured crisis. This is an attempt to change the demographics of the United States in order to give permanent power to the Democratic Party. That's all it is, no matter what they tell you..."