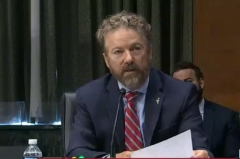 "And I don't think any of these experts are omniscient. I think they have a basis of knowledge, but when you prognosticate about the future, and when you advocate for things dramatic and drastic, like closing all the schools, you should look at all the information."

Earlier on Tuesday, Sen. Paul, a physician, said it would be "a huge mistake" if schools don't reopen in the fall.

He told Dr. Anthony Fauci, "We can listen to your advice," but -- "I don't think you are the one person that gets to make a decision."

"With regard to going back to school, one thing that was left out of that discussion is mortality," Paul told a hearing of the Senate Health, Education, Labor and Pensions Committee.

"I mean, shouldn't we at least be discussing what the mortality of children is?" He noted that mortality in children up to age 18, based on data from New York, "approaches zero," while mortality in those between 18 and 45 is 10 out of 100,000.

"So, really, we do need to be thinking about that," Paul said. He noted that in rural states, including his home state of Kentucky, there have been fewer deaths from coronavirus than there are in an average flu season.

Except for certain areas, the virus has had a "relatively benign" impact, Paul noted:

And I think the one-size-fits-all that we are going to have a national strategy and nobody's going to go to school is kind of ridiculous.

We can listen to your advice, but there are people on the other side saying there's not going to be a surge and that we can safely open the economy and the facts will bear this out.

But if we keep kids out of school for another year, what's going to happen is the poor and underprivileged kids who don't have a parent that's able to teach them at home are not going to learn for a full year.

Fauci responded that he has "never made myself out to be the end-all and only voice in this."

I am a scientist, a physician and a public health official. I give advice according to the best scientific evidence. There are a number of other people who come into that and give advice that are more related to the things that you spoke about the need to get the country back open again and economically.

The second thing is that you used the word we should be humble about what we don't know, and I think that falls under the fact that we don't know everything about this virus, and we really better be very careful, particularly when it comes to children, because the more and more we learn, we are seeing things about what this virus can do that we didn't see from the studies in China or in Europe.

For example, right now children presenting with COVID-19 who actually have a very strange inflammatory syndrome very similar to Kawasaki syndrome. I think we had better be … in thinking that children are completely immune to the deleterious effects.

So, again, you are right in the numbers that children in general do much, much better than adults and the elderly and particularly those with underlying conditions. But I am very careful and hopefully humble in knowing that I don't know everything about this disease and that is why I am very reserved in making broad predictions.

We really need to have competition among the experts, because we had experts, particularly that guy Ferguson over in England, say it's going to be 2 million (deaths from coronavirus). Best case, a million.

Well, this guy's gotten everything wrong for the last couple of decades. He predicted mad cow disease would kill 136,000, and 177 people died.

So, we have to take with a grain of salt these experts and their prognostications. The future is very uncertain, but turning down and closing the entire economy has been devastating. That's a fact.