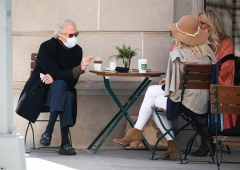 People wear face masks while dining outside at a New York City restaurant on March 23, 2021. (Photo by Noam Galai/Getty Images)

(CNSNews.com) - If Sen. Rand Paul had his way, it would be up to individual Americans, not unelected bureaucrats, to decide whether to wear a mask. He said "emotionalism," not "science," is ruling the roost.

"Well, I think I'm unequivocally for freedom, for a free society. And each individual would make their own decisions," Paul, a Kentucky Republican, told "Your World" with Neil Cavuto on Tuesday.

So, I mean, if you have cancer, you might want to continue to wear a mask for all the time. That's the way it was in the past. Those who were at risk did wear a mask, and those who were not at risk didn't wear masks. So, people would make that decision.

And the thing is, is, no matter how much these nanny staters want to tell us what to do, you can see in people's eyes. I meet people all the time when I'm restaurants, 75 years old, and they say, I'm two weeks out. I'm finally free. And I'm going to restaurants again to -- again. I say, good for them. I'm going to go to church again.

Dr. Fauci doesn't know any of this. He's making conjecture, saying, what if? What if the South African strain is -- the vaccine doesn't work against them? What I say to Dr. Fauci is, show me that the variants are escaping it. Show me that there's this mass contagion going on from people being reinfected who have been vaccinated or who have it again. I will reassess. I will reassess and I will consider the data.

But so far, all he's telling me is his opinion. And, really, their opinion is -- look, they had another one of these vaccine doctors on television who is like, ooh, it's about civility. Well, civility is not science. For goodness' sake, show us some evidence to back up these mandates.

And what about private businesses and restaurants that require patrons to wear masks?

"We do what we're forced to do to live in Dr. Fauci's world," Paul said:

But someone has to contend with him and show him that his edicts are not based on science.

For example, how many people watching this program have walked into a restaurant, put their mask on for 10 feet, and seen 400 people look up at you who are all not wearing their mask, all in an enclosure, breathing?

Do you think those 10 steps of wearing your mask meant anything? That's non-science. That basically is someone expressing some sort of form of civility, but has nothing to do with science. You're on the airplane, you wear a mask, you're sitting this far from people. And then they say when you get off, we're going to get off six feet apart now.

I have been sitting next to some guy three inches from me the whole time. But now we're going to use science. And he has to go six feet in front of me to get off the plane. None of this is based in science.

It's all emotionalism. And we're going to be here forever if we keep listening to these people.

The simple fact is, if you have been vaccinated, and you're two weeks out from your second one, throw your mask away and do what you want, because Dr. Fauci is overkill on all of this.

With so many people building immunity to COVID-19, either by recovering from the disease or getting vaccinated, Sen. Paul said the burden should be on government to show evidence that those people are still transmitting the disease.

"What Dr. Fauci said is, they might be. He's sort of like, what if they could spread the disease? Well, that sounds to me like conjecture. And you could look at Dr. Fauci and say, well, what if the Spanish Flu comes back? Shouldn't we wear a mask every year for the rest of our life because someday the Spanish Flu is going to come back?