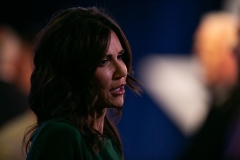 (CNSNews.com) - South Dakota's Republican Governor Krisi Noem has launched an "immediate review" of all state investments to make sure taxpayer dollars are not being invested in companies that pose a threat to U.S. national security, such as companies owned or controlled by Communist China.

"South Dakotans deserve to know if their taxpayer dollars are being invested to benefit the Chinese Communist Party," Noem said in a news release.

"It's clear that China is an enemy of the United States of America. They hate us, and that we should be doing everything we can to protect the citizens of this country from them and their actions.

"So today, in our state, I called on the South Dakota Investment Council to do a review of how we invest taxpayer dollars. They have seven days to get that review to me. They are conducting that. In fact, I was notified today that they have already pulled funds out of two Chinese companies that we were investing in, apparently here in our state, and in seven days we'll look at other funds that may have a presence from Communist China.

"I think it's important that we not only look at the real threat that China is, how they're gathering information on our citizens, how they are using it against us, how they are buying up our ag land and buying up our food supply systems, besides building up their military, stealing our I.P. and manipulating their currency.

"You know, they have a long term plan to dominate the United States of America and destroy us, and Republicans and Democrats alike need to wake up. We don't have a president that's protecting us. It's up to us to take action as leaders everywhere that we can."

Noem said she's been concerned about the threat posed by China for 20 years:

"You know, I'm a farmer and rancher, and I oversaw federal farm programs in our state for many years before I went to Congress and now served as governor. I saw what China was doing. They were buying our fertilizer companies, they were buying our chemical companies, they were coming in and buying up our manufacturing facilities, our processing facilities.

"I had a lot of problems a couple of years ago during COVID with a meat-packing plant. It was a Chinese-owned company that didn't care about its people, didn't care about the United States or protecting us, and they made it difficult for me to do my job as governor and do the right thing for our people here.

"So this is not a new plan that China has. They've hated us for generations. They have, thousands of years, a plan to be a world power again, and they are -- they're getting stronger and stronger, and our president could take action today to strengthen the United States. He's refusing to. And apparently, some senators are helping."

She was referring to the retiring Sen. Pat Toomey (R-Pa.), who has said he will not support a broad ban on investment by American citizens in China. "I think that's a terrible idea," he told the Council on Foreign Relations in October.

"My big concern is that this gets misused by people who quite willfully want to block trade and investment. And so if we’re going to do it, at a minimum, it’s got to be very well proscribed, very well defined."

In late November, Noem banned the use of TikTok, the video-sharing app, on state-owned devices. "This order is in response to the growing national security threat posed by TikTok due to its data gathering operations on behalf of the Chinese Communist Party (CCP)," she said in a press release.